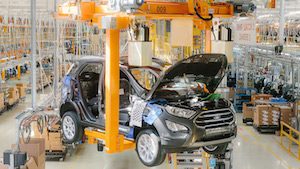 Russia - Production of the new small SUV has started at the company's plant in Naberezhenye Chelny. The news comes seven months after the EcoSport started rolling off lines in Craiova, Romania.

"Ford has a long heritage and global reputation for building high quality, technologically-advanced SUVs that our customers want to own," commented Steven Armstrong, president, Ford of Europe, Middle East and Africa. "The Ford SUVs we manufacture and sell in Russia build on this vast experience and are tailor-made to meet the specific requirements of our Russian customers."

Demand for SUVs continues to rise in several European countries, including Russia, where they now account for around 1-in-3 new vehicles sold. Ford's sales in the segment rose by 36% in the country, and 15% in all of Europe, during the first four months of 2018.

In a recent interview with AMS, Adil Shirinov, CEO of Ford Sollers, described the company's strategy for Russia. He highlighted SUVs and light commercial vehicles (LCVs) as being two strong segments.

As well as tapping into Europe's love for SUVs, Ford is also looking to take advantage of growth in the segment in other parts of the world. It recently announced plans to boost SUV production at its Kentucky plant in the US in order to meet rising demand in the Middle East.