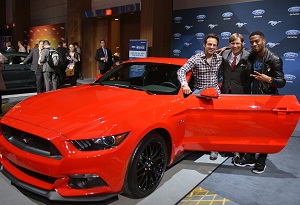 US – The vehicle-maker is due to launch 23 new models around the world, open three more manufacturing facilities and add 11,000 personnel to its workforce.

In North America, 16 new vehicles will be launched, including: the Ford Mustang, the Ford Transit Connect, the Ford Transit and the Lincoln MKC. This will be the greatest number of new vehicles the OEM has launched in a single year in over a century. Ford will also add two engines to its EcoBoost line-up, bringing the total offering to six. One will be a 2.3-litre engine; the other has yet to be specified.

The new manufacturing facilities will be Changan Ford Assembly Plant No.3 and Changan Transmission Plant in Chongqing, China, plus Camaçari Engine Plant in Brazil. The assembly plant in Chongqing will increase Ford’s production capacity in China by 300,000 units per year.

As for the increased workforce, 5,000 of the new positions will be in North America and 6,000 in Asia. Ford says that 80% of the new salaried jobs will be filled by technical professionals working in product development, manufacturing, quality and IT.