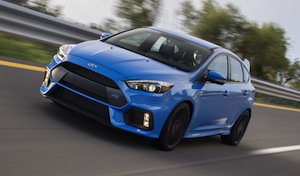 Germany – The OEM says it is experiencing strong sales of its performance cars and that the Focus RS will soon be joined in the US by the F-150 Raptor this autumn and the Ford GT supercar, which will go into production late in 2016. The line-up already includes the Focus ST and Fiesta ST, plus the Shelby GT350 and GT350R, which debuted last year.

The Focus RS was developed by Ford Performance engineers in Europe and the US, and is powered by a specially engineered version of the new 2.3-litre EcoBoost engine. According to its maker, the model is capable of going from 0-62mph in 4.7 seconds, giving it the fastest acceleration of any Ford RS.

Ford plans to introduce 12 performance vehicles worldwide through to 2020.