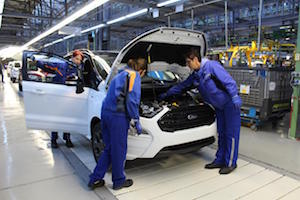 Romania – The company said that it switched to European production in place of exports from Chennai, India, in order to meet rising demand. The change required an investment of €200m ($235.8m).

“EcoSport is another example of how Ford is growing our business on our strengths, including world-class SUVs,” said Steven Armstrong, Ford group vice-president and president, Europe, Middle East and Africa. “With demand growing for EcoSport, and compact SUVs in general, now is the right time to localise production in Europe to meet our customers’ needs.”

Ford acquired the Craiova plant in March 2008 and has since invested more than $1 billion. It is the sole source of EcoSports for Europe, with the exception of Russia, and in total supplies 56 markets on four continents, including Turkmenistan and South Africa. By the end of 2017, the workforce will rise to 3,900 through the addition of 1,700 jobs.

Growth of 30% in Ford’s SUV sales last year has been followed by an increase of 27% in the first eight months of 2017.