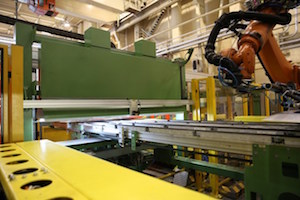 Germany – The OEM contracted Schuler to install a tri-axis transfer with overhauling carriages plus a blank loader with a line scanner. The work was completed after seven weeks and in the first six months of production the modernised press turned out 1.2m parts.

In the original set up, the transfer was mechanically linked to the rest of the system, the motion curves could not be adjusted and components had to be stored between the press slides. Following the update, a servomotoric overhauling slide integrated in the transfer rails has enabled step distances of 3.6 metres.

Furthermore, coupling and uncoupling take place automatically during the tool change, meaning that all set-up procedures can be performed outside the press and the die changeover times are “significantly reduced”, according to Schuler. The supplier adds that the direct drives and “highly dynamic” servomotors can increase output by up to 30%.

The programmability of the transfer will enable Ford to design new dies more flexibly and optimise output. Schuler says the dies are also “easier to set up and adjust”, with the profile of the transfer rails reduced from 250mm to 200mm and the freedom of movement and visibility improved.

The blank loader is also designed to increase productivity. The location of each blank is detected by the line scanner as it passes, meaning that the process is now continuous. The centring robot can then optimally align the blank for the subsequent forming process. The line scanner is independent of the blank shape, while the maximum blank size is 4.1 metres. The system can handle parts side by side as well as in a row.

The scanner is positioned directly above the conveyor, rather than several metres above as in conventional optical centring stations, which means that the system is protected against ambient light and maintains its reliability. Schuler says it is accurate to three millimetres and that positional corrections can be made up to 100mm.