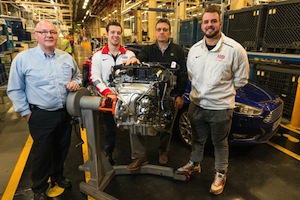 UK – The milestone was reached 35 years after production began at the factory in Wales. Earlier this year, Bridgend Engine Plant (BEP) also made its 8 millionth small-capacity, petrol Duratec engine since ‘job one’ in May 1998.

“The Duratec engine has been produced here for 17 years and is exported across the globe. This is built alongside Ford’s very latest technology – our EcoBoost products – which provide ultra-low emissions, excellent fuel economy, refinement and performance,” commented Ian Pearson, plant manager, Ford Bridgend.