First 2016 Acura ILX made at Marysville 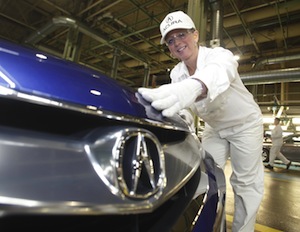 US – The sports sedan was completed on the 20th anniversary of the start of Acura production in the country, which launched with the Acura CL at the East Liberty plant in Ohio. North American sales of locally made vehicles have now reached 2m, with a record of 158,043 last year.

Acura ILX manufacturing began in 2012 at the Greensburg plant, Indiana, and the model will now be produced alongside the TLX luxury sedan, which launched last August. The Marysville plant has made significant investments to support production of the 2016 Acura ILX, including new glass installation and rear suspension equipment. The 2.4-litre engine which powers the ILX and TLX is made at the nearby Anna plant, also in Ohio.

“Our associates are applying our tremendous experience in producing high-quality Acura products and will leverage the production of TLX and ILX in one plant to meet the high expectations of our Acura customers,” commented plant manager Rob May.

Last year, 94% of Acura vehicles sold in America were made at the company’s plants in Indiana, Ohio and Alabama, using both locally and globally sourced parts. This autumn, production of the next-generation Acura NSX will be launched at the new Performance Manufacturing Center (PMC), which is located next to the Marysville plant and the development centre of Honda R&D, which took the lead with the new NSX.