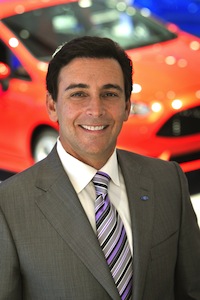 US – When Alan Mulally retires on July 1, chief operating officer Mark Fields will step into the role of president and CEO and join the board of directors.

Fields joined Ford in 1989, and prior to his existing role as COO he served as executive vice-president and president, The Americas; group vice-president at Premier Automotive Group (PAG); and executive vice-president, Ford of Europe and PAG. He also worked for Mazda between 1998 and 2002. As COO from 2012, he has been leading all of Ford’s global business operations and most skill teams, including product development, manufacturing, purchasing, and marketing, sales and service.

Mulally has spent eight years at the top at Ford, having joined the company in 2006 after a lengthy career in aerospace with Boeing. At the announcement of his retirement, executive chairman Bill Ford said he “deservedly will be long remembered for engineering one of the most successful business turnarounds in history”.

According to the carmaker, its leadership transition this summer will occur six months earlier than previously anticipated, following Mulally’s assessment of the team’s readiness.