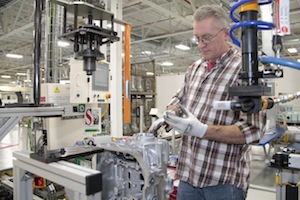 US – The plant in Indiana has produced its 1millionth TorqueFlite 845RE unit, almost three years after the start of manufacturing operations for the eight-speed transmission. The launch and a subsequent production expansion have required investment of around $860m at Kokomo since 2010.

The eight-speed transmission powers six models – the Jeep Grand Cherokee, Chrysler 300, Dodge Charger, Dodge Challenger, Dodge Durango and Ram 1500 – and has had “a profound impact” on the OEM’s vehicle line-up, according to Jeffrey Lux, vice-president – Transmission Powertrain, FCA North America. FCA claims the technology can generate a fuel economy improvement of up to 9% “compared with a more conventional automatic”.