Jaguar Land Rover’s ‘all new’ 2013 model Range Rover marks a radical departure from the hefty leviathans that have previously made up the marque’s 40-year history. The fourth generation Range Rover is said to be the first of its class with an all-aluminium unibody structure.

The result? A huge weight saving, making the vehicle 420kg lighter than its predecessor. And as well as the associated reduction in fuel consumption, the stiffer body is credited with generating an improvement in NVH. An automotive body plant these days is very different environment from that of 30, 20, or even 10 years ago. Today’s factories are cleaner and quieter affairs – and also more productive. This is due to the extensive use of fasteners – not just in the assembly stage for mounting trim and interior fittings, but right through the BIW build – which is transforming automotive manufacturing. The 2013 Range Rover, for instance, includes around 300 rivet nuts and 150 rivet studs, ranging from M6 to M14 in size, each of which would formerly have been a welded fastener, says Adrian Ellis, UK sales manager for PROFIL Verbindungstechnik, the German supplier of the fasteners in question. 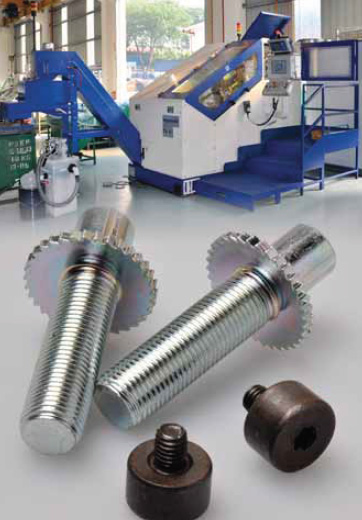 Driven by the three-fold pressures of cost reduction, lightweighting and assembly efficiency, the use of fastener technology in recent years has transformed automotive assembly operations. Industry observer and ex-automotive manufacturing engineer Richard Gane says there are strong grounds for believing that the use of fasteners is set to grow even more strongly. “The automotive industry is naturally conservative, and is reluctant to introduce potential risk,” he notes. “Construction changes are phased in with new model introductions, meaning that whatever the technology, the production design engineers have to accept it and sign it off. Manufacturing engineering might recommend it, but it’s really down to design engineering at the end of the day.” So what benefits will a design engineer see? The answer, is a complex one, stretching right across the business. Lightweighting features strongly thanks to an improved ability to join together metals other than standard mild and high-tensile steel. But also getting ticks of approval are improved logistics processes, purchasing and inventory management efficiencies, a significant reduction in process cycle time, and processes with genuine claims to be greener, thanks to lower resource inputs and plant services requirements.

The nuts and bolts of it
Pierce studs, pierce nuts, rivet nuts, rivet studs, press-in studs and nuts – whatever the fastener, it’s now commonplace to find a single fastener covering a wide range of sheet metal thicknesses. Which, for engineers used to aerospace applications, where fastener lengths conform to tightly specified – and quite narrow ranges of thickness – is quite a transformation.

Take PROFIL’s RND flanged rivet nut, for instance. A ‘major runner’ in automotive applications, explains Ellis, it is suitable for many different kinds of metals, including surface-coated metals and sandwich metals, stretching from aluminium to high-strength steels in the 1000-1500 megapascal tensile strength range.

Compared to standard weld-based joining procedures, the mechanical attachment of a rivet nut or similar fastener offers a cost saving of up to 50%, says Ellis. Partly, this is because the number of intermediate manufacturing steps such as temporary storage, transport within the plant, welding, cooling, and quality assurance measures is greatly reduced. But also, he stresses, per-unit installation times are not only faster, but can be undertaken within the cycle time of an operation such as pressing. While there is a lower cost and a reduction in cycle time, there’s also the cost of the installation equipment to take into consideration. “While leasing is an option, most customers simply buy the equipment,” says Ellis. “It has a 25-year life, meaning that you can amortise it over three to five model cycles.”

A standard four-track feeding machine is capable of feeding four nuts simultaneously into the same die – which must be engineered to accept and press them. Doublingup is possible, too: if a panel required eight fasteners, for instance, two 4-track machines would do the job, again within a single press stroke. Six-track feeding machines represent the normal maximum of a single machine, adds Ellis, with 4-track being the most commonly purchased option. But he points out, PROFIL has built a number of 8-track machines to order driven by demand from BMW, a pioneer in the use of BIW fasteners.

Simplifying logistics
The associated purchasing and inventory costs also offer a benefit, which manufacturers have been relatively slow to appreciate, reckons Ellis. The impetus for these lower costs: the fact that a single fastener can cover a wide range of thicknesses, from 0.7mm thick to 4mm.

“Customers are cottoning onto the fact that one part number can cover 90% of the vehicle, which is why we talk of an ‘in place’ cost, or total cost of acquisition,” he explains. “There’s one part number to order, one part number to stock and transport, and one part number to manage.” Which is a message that is very familiar to TR Fastenings, a supplier of automotive fastenings used in door fixings, seat fixings, bumper fixings and light fixings. “Getting high volume, low-cost components from the supplier to the production line involves complex administration, which can add considerably to the total in place cost of the parts,” says TR’s group sales director, Glenda Roberts. “Our logistical supply systems can practically eliminate these administration processes, and thereby reduce the customer’s overall costs.”

“Logistics is important,” she sums up. “Manufacturers are looking for a global capability and footprint, and a supplier who can offer technical excellence and reliable logistics in a complete package.”

Technical advances
PROFIL, notes Ellis, is presently in the throes of launching a new fastener product – a ‘light’ version of its popular RND rivet nut, RND Light. Some 30% lighter than the existing RND nut – because it is smaller – the new nut will be standard on the next BMW 1-series, as well as subsequent Jaguar Land Rover vehicles. Containing less material, it has an enhanced performance, despite this reduction in material – and because it uses less material, it’s actually cheaper to manufacture than the existing RND nut, explains Ellis.