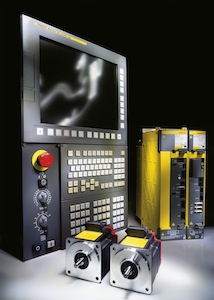 Japan – The robot-maker has purchased 659,000 sq.m of land at Mibu-hanyuda Industrial Park, Tochigi Prefecture, with plans to build new facilities from September 2015. This will enable the company to increase its capacity for CNCs, servo-motors and servo-amplifiers, in line with growing demand in Europe.

In addition, at its headquarters in Oshino-mura, Yamanashi Prefecture, Fanuc will build four new factories as well as expanding its laboratories, introducing new test equipment.

According to Chris Sumner, vice-president, Fanuc Europe, the growing European demand has been reflected in the company’s orders over the past 12 months, adding that “in the UK in particular we have seen orders increase across the board by over 50%”.

He continued: “As factories look to implement more automation technologies within their manufacturing processes, many have realised the cost-saving potential and increased rate of production that this brings to their businesses.”