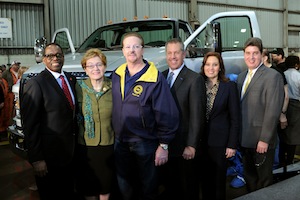 US – Ford is investing $168m to transition manufacture from Mexico to its assembly plant at Avon Lake, Cleveland. Production will shift early next year, ahead of a sales launch in spring.

The OEM’s investment will go towards retooling Avon Lake, which opened in 1974 and currently produces E-Series vans and other commercial vehicles. E-Series cargo and passenger van production will end later this year, while E-Series cutaway vans and stripped chassis will continue to be built at Ohio for most of the decade.

The replacement for the E-Series vans, the new 2015 Ford Transit, will start production this spring at Kanas City, Missouri.

The production shift from Mexico to Ohio is part of a collective bargaining agreement negotiated by the United Auto Workers (UAW) union in 2011.