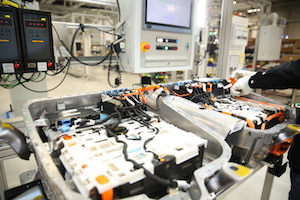 China - Just months after opening the facility, the BMW Brilliance Automotive (BBA) joint venture has announced an expansion to its battery plant in Shenyang. New batteries for the BMW iX3, which is set for launch in 2020, will be made here.

"Today, we break ground for the next stage of our electric model offensive," commented Oliver Zipse, member of the Board of Management of BMW, responsible for production. "In this regard, we further increase the capacity of our local battery production. This enables us to follow the increasing demand for electro mobility in China."

The OEM has not revealed how many batteries the plant will be able to produce following the expansion. However, it has stated that the two BBA automotive plants in Tiexi and Dadong will reach 520,000 units per year in 2019.

BMW has recently made several announcements regarding the production of electrified vehicles in the world's largest car market. It started making the new BMW 5 Series Plug-in Hybrid at the Dadong plant earlier this year, and doubled sales of electrified models in China between 2016 and 2017. The company is also looking to build more electrified vehicles in Europe, and started production of its i8 Roadster and updated i8 Coupe in Leipzig, Germany.

In a recent interview with AMS, Hans-Peter Kemser, director of BMW's Leipzig plant, described the challenges involved in making electrified models alongside conventional vehicles that only use internal combustion engines. Zipse believes that this strategy will be vital for the company as it looks to take advantange of the electrification trend. "Maximum utilisation of plant capacity is a priority for us," he stated. "That is why we are designing our production system so that we can build models with a fully or partially electric drive train or combustion engine on the same assembly line."