Yanfeng is busily growing its operation within Europe as two new facilities come on stream, with a manufacturing plant in the Czech Republic and a new test centre in Slovakia

Though the company was only formally established in 2015 Yanfeng Automotive Interiors already registers as one of the biggest automotive suppliers worldwide. Annual sales reached $8.5bn in the middle of this year generated by 33,000 employees in 113 plants in 18 different countries for a product range including door and instrument panels, floor and overhead consoles and other elements including trim and lighting.

However, that status has not been achieved from a standing start – the company was formed as a 70-30 joint venture between the China-based company Yanfeng Automotive Trim Systems, whose ownership chain leads back to that country’s SAIC Motor Corporation, and US automotive seating supplier Adient, previously part of Johnson Controls.

Nevertheless it is a company that keeps growing, not least in Europe where the middle of 2017 saw the opening of two new facilities in the central region of the continent – a new manufacturing plant in Planá nad Lužnicí, roughly 100km to the south of Prague in the Czech Republic and a new test facility in Trencín, just across the border on the western rim of Slovakia. The new factory at Planá is, in fact the first manufacturing operation in Europe to be constructed by the joint venture since it was formed.

Planá aheadFormally inaugurated in June 2017, the Planá site is now in the ramp-up stage to commence full production operations in 2018, when the 23,000 sq m plant constructed on a greenfield site will be employing 300 people approximately. The plant will make instrument and door inner panels with the launch customer for the site being Daimler, operating in neighbouring Germany, though more precise details of the initial output are not available.

At the opening ceremony, the most striking initial visual impression the plant provided was of the degree of empty space it contained – an indication, though, not of over-ambition but of the company’s confidence that the site will gain increasing amounts of work and will require investment in more production equipment. As such the number of employees is expected to increase to 500 by 2021. But even by the end of 2018 production operations for three distinct programmes should be underway just for that one customer, when work at the plant is expected to take place five days a week, 24 hours per day.

Nevertheless, at the inauguration the plant was already kitted out with a battery of manufacturing hardware including eleven injection moulding machines ranging from 700-2,700 tonnes of force, one PVC slush skin machine, six assembly stations for door panels and seven for instrument panels, eight welding machines and three foaming stations – all of it just for the first of those programmes.

Moreover, as plant manager Jirí Rösner confirms, the Planá facility does not merely represent the state-of-the-art in terms of current production technology employed by Yanfeng it also pushes the boundaries at least in a European context of the level of technology employed. On the first of those counts, for instance, Rösner says that the plant has been designed right from the start to employ Industry 4.0 networking throughout its operations. This is reflected, he indicates, in the choice of equipment suppliers where Industry 4.0 capability has been a paramount selection criterion. The preponderance of injection moulding machines from German supplier KrausMaffei is a case in point as is the similar emphasis on plastic component manufacturing equipment from another German company FRIMO. The benefits of that policy, Rösner indicates, will be pervasive though one specific benchmark he cites is that in order to achieve comparable production volumes to the 500 people scheduled to be employed at Planá in four years time a less technologically advanced counterpart might need to employ “a couple of hundred” people more.

The second instance where the plant marks an advance over its other European operations is the PVC slush line, which produces ‘soft touch’ skins that form the outer layer of units such as consoles and door panels. As Rösner explains, the massive machine is one that Yanfeng has designed and built for itself and though it operates similar installations elsewhere in the word the one at Planá is the “first in Europe”. A key capability of the machine is its combination of high levels of both efficiency and versatility achieved in turn through its high level of automation.

Normally machines of this type, Rösner notes, can operate in a maximum of two “modes” with “one operator” in continuous attendance. But the Planá installation can be varied between “twenty four modes” with just “two operators”. Interestingly he adds that a necessary attribute for personnel who will actually operate the equipment is an ability to make quality control assessments of products coming out of the installation through direct sense of touch.

Cross-border relationsThe Planá opening was preceded by the formal unveiling of a new test laboratory at the company’s existing technical centre in Trencín, Slovakia. The laboratory, which is double the floorspace at Planá at just over 4,800 sq m, provides support for a comprehensive range of durability and other materials testing procedures including exposure to temperatures from -40ºC to +120ºC, UV light resistance and climate variation.

Ivan Kebisek, engineering director and site leader at Trencín, explains that the creation of the facility was made necessary by the fact that after the tie-up between Adient and Yanfeng the European test resources that Adient formerly enjoyed remained an asset of Johnson Controls. Hence the new company had almost no such capabilities of its own – the exception being some safety-related activities at Neuss in Germany – and was reliant on the use of third party resources. That was, he observes, not just expensive but also meant that testing was remote from the engineering operations it had to support.

Now in contrast testing takes place “one floor below the design office” and hence iteration between the two is in every sense closer and better integrated with obvious implications for time compression in product development. But, as Kebisek also points out, the same is true in the support of manufacturing operations for instance in the verification of first-run products – something that is likely to be especially pertinent for the brand new Planá facility as it gets up to speed. The 160 people employed across the whole of the Trencín site in 2017, he adds, is likely to increase by another 40 by mid-2018.

Over that same period and beyond Kebisek indicates that the testing of the surface quality of products in particular is likely to increase in importance. This will derive in part, he says, from the increasing use of “natural materials”. But another factor will be the further development of the PVC skins production processes by the company’s own slush technique for which he says a couple of enhancement projects are planned. A particular example of the laboratory’s state-of-the-art surface testing capability that Kebisek identifies, by the way, is the “3D surface scanner” it employs to check that the panel through which an airbag erupts is not just invisible to the naked eye when cars are first built but will remain so remain so indefinitely. Previously, he explains, the procedure involved purely subjective assessment by an experienced individual, but the scanner can now provide more objective verification.

In more general terms both installations provide evidence of the determination of the majority Chinese shareholder in the joint venture to establish itself outside of its native country. According to Jochen Heier, vice-president and general manager for Europe and South Africa for the company, before the new operation was formed Yanfeng had no operations at all in Europe and only one in North America even though it already was the biggest automotive interiors supplier in China. But, he notes, the company’s aim is “to be global” and, as such, the tie-up with Adient which already had extensive operations in the US and Europe was an ideal fit. In fact on the day it came into existence the joint venture already had eleven manufacturing plants in Europe inherited from Johnson Controls. Moreover, he adds, there had been close cooperation between the two involving seating production in China before Adient was spun out of Johnson Controls so the joint venture is to some extent a case of business as usual. 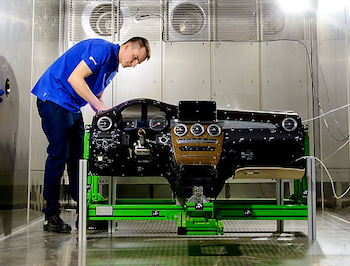 Setting up in Trencín and Planá, Yanfeng is acknowledging the emergence of central Europe as a major centre for automotive manufacturing

Resurgent regionThrough their location in central rather than western Europe both the Trencín and Planá sites also represent a recognition on Yanfeng’s part that the area is now one where major OEMs are increasingly setting up operations.

“This is where they are going and we need to follow them,” explains Heier. The company already has two plants in Germany his expectation is that over the coming years the Czech Republic, Slovakia and Hungary are likely to be the focus of further expansion in Europe. Again, though, there is an element of continuity in this in policy if not in the particular geographical area involved.

The ‘South Africa’ in Heier’s job title refers to a plant that Yanfeng set up several years ago specifically to serve a Daimler plant in that country. Nevertheless, Heier is adamant that the joint venture is more than just the sum of its previous parts.

The distinctive thing about the new company, he says, is that it possesses a comprehensive knowledge base of business practices and customer preferences right across North America, Europe and China and, as such, can fulfil the requirement that OEMs increasingly place on their tier-one suppliers that they can operate on a global basis but with the aid of appropriately informed local expertise. “Each of those areas has their own unique culture,” he states. “But by bringing them together in this way they can learn from each other about product, processes and business procedures.”

The new technical centre in Trencín, he points out, joins already existing counterparts with broadly similar technical capabilities in the US and China – the difference is that each also has a detailed familiarity with the relevant regional legislative environment. In addition, Heier continues, relevant testing capabilities for vehicle interior elements will also have to be capable of dealing with a changing set of technical challenges. Something he identifies as likely to prove particularly significant will be a trend towards the inclusion within vehicle passenger compartments of increasingly large display screens which will moreover be ‘smart’ touch-sensitive devices rather than just passive components.

In turn this will decrease the number of conventional variable position manual switches with which drivers will interact. He adds that Yanfeng has already found one “partner” company with which it intends to develop appropriate technologies but in line with its drive for sustained expansion is looking for others as well.