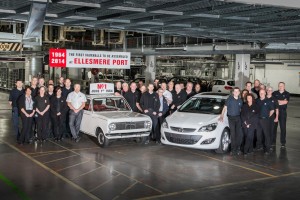 UK – Vauxhall has celebrated 50 years of production at its Ellesmere Port facility. The first new car to be produced at the plant was the Viva HA, a model name that would run in a number of variants until 1978 when it was replaced by the Chevette. The first Astra, Vauxhall’s first front-wheel drive car, was built on November 16, 1981, and the latest variant continues in production to this day.

Recently threatened with closure, the plant’s survival into the next decade has been secured with the allocation of the next-generation Astra. Production of the new model will start in the autumn of 2015, with Ellesmere Port being the lead plant of only two producing this model across Europe.