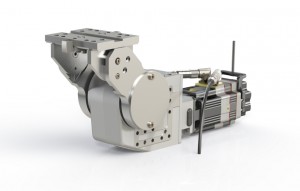 DE-STA-CO has introduced a new electric pivot unit that it says is smaller and lighter than traditional pneumatic units, while providing uniform torque and improved versatility. The company claims the 98W electric pivot unit enables manufacturers to add a pivot in tight spaces and gain better operational control of electrode tip dressers, clamps and other tools.

Utilising a worm gear instead of a pneumatic toggle mechanism, the unit can rotate its arms through 360°. It can operate in two modes: programmed setting with limited opening angles or infinite opening angles. DE-STA-CO say it is compatible with multiple motors and can be interchanged with common pneumatic pivot units equipped with 125, 160 or 200mm cylinders.