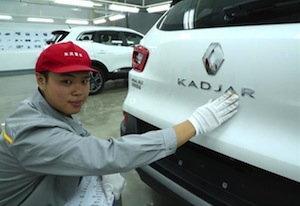 China – The factory in Wuhan has been unveiled two years after the 50:50 joint venture was agreed between Renault and Dongfeng, and an initial investment of €870m ($946.6m). The launch capacity is 150,000 units per year, with the potential for this figure to double in future.

With 95 hectares of covered space on a greenfield site, the Wuhan operation consists of vehicle and powertrain production facilities plus an R&D centre. The factory will make the Renault Kadjar for sale in China from March, while a D-segment SUV will enter production later this year. According to Renault, the local content will be more than 80%.

The press shop has a 5,400-tonne, high-speed stamping line and a workforce of 40 people. The bodyshop has a 49% automation level, with 139 robots and 197 human operators. The paintshop employs 82 people, while trim and chassis has 360.

The Wuhan complex received ISO 9001 quality certification in November last year and is currently working on ISO 14001 environmental certification. The facilities incorporate a number of sustainability measures, including: LED lighting; a building management system to optimise energy usage; water-soluble, solvent-free paints with low levels of volatile organic compounds; and 100% treatment of industrial effluents, with 40% reuse for sanitary facilities and the watering of green spaces.

The vehicles produced at Wuhan will comply with Beijing 5 emissions standards for large cities and Beijing 4 for other cities, equivalent to Euro 5 and 4. In September 2015, Dongfeng Renault Automotive Company also announced plans to make its first electric model in China from 2017, based on the current Fluence Z.E..