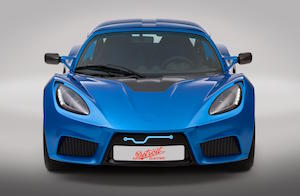 UK – The deal with Far East Smarter Energy Group of China has helped to secure investment of $1.8 billion for the development and manufacture of electric vehicles (EVs) over three years. Detroit Electric’s European operations will receive $370m during the next four years, enabling it to complete the homologation phase for its SP:01 sports car and to start volume production at Leamington Spa.

Albert Lam, chairman and CEO of Detroit Electric, described the project as “a significant boost to vehicle manufacturing and the EV industry in Europe and an important new step towards bringing our family of EVs to market”.

Series production of the SP:01 is due to begin later this year and will require the creation of 100 manufacturing and 120 engineering jobs. In addition to SP:01 activities, the joint venture will establish a new design, R&D, testing and production facility focusing on the development of a range of Detroit Electric EVs. The first model to enter production, in late 2018, will be an SUV and a third model is planned for 2020. Production facilities at Leamington Spa will be expanded and the workforce will be doubled to 400 personnel.

By 2020, the joint venture aims to be selling 100,000 Detroit Electric vehicles per year across global markets.