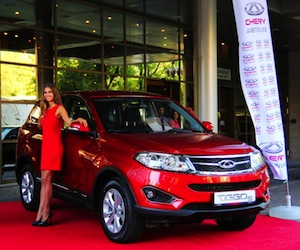 Russia – The Bonus 3 and Tiggo 5 were unveiled at the World Trade Centre in Moscow to celebrate the beginning of a local assembly project between the two companies, plus the national launch of the models.

Since entering the Russian market in 2005, Chery has sold over 180,000 units in the country. The OEM claims that not only are its sales figures higher than other Chinese brands, but the two new models boast “overwhelming superiorities over similar products in power, safety, configuration, appearance and interior comfort”.

According to Chery, its Ambition Line will be “an effective combination of the three new models”, providing “more and better choices to Russian customers”.