Production of Land Rover’s original 4x4 will end in style, accompanied by a commemorative Celebration Line which showcases 1940s manufacturing techniques; AMS put on a cow gown and looked around 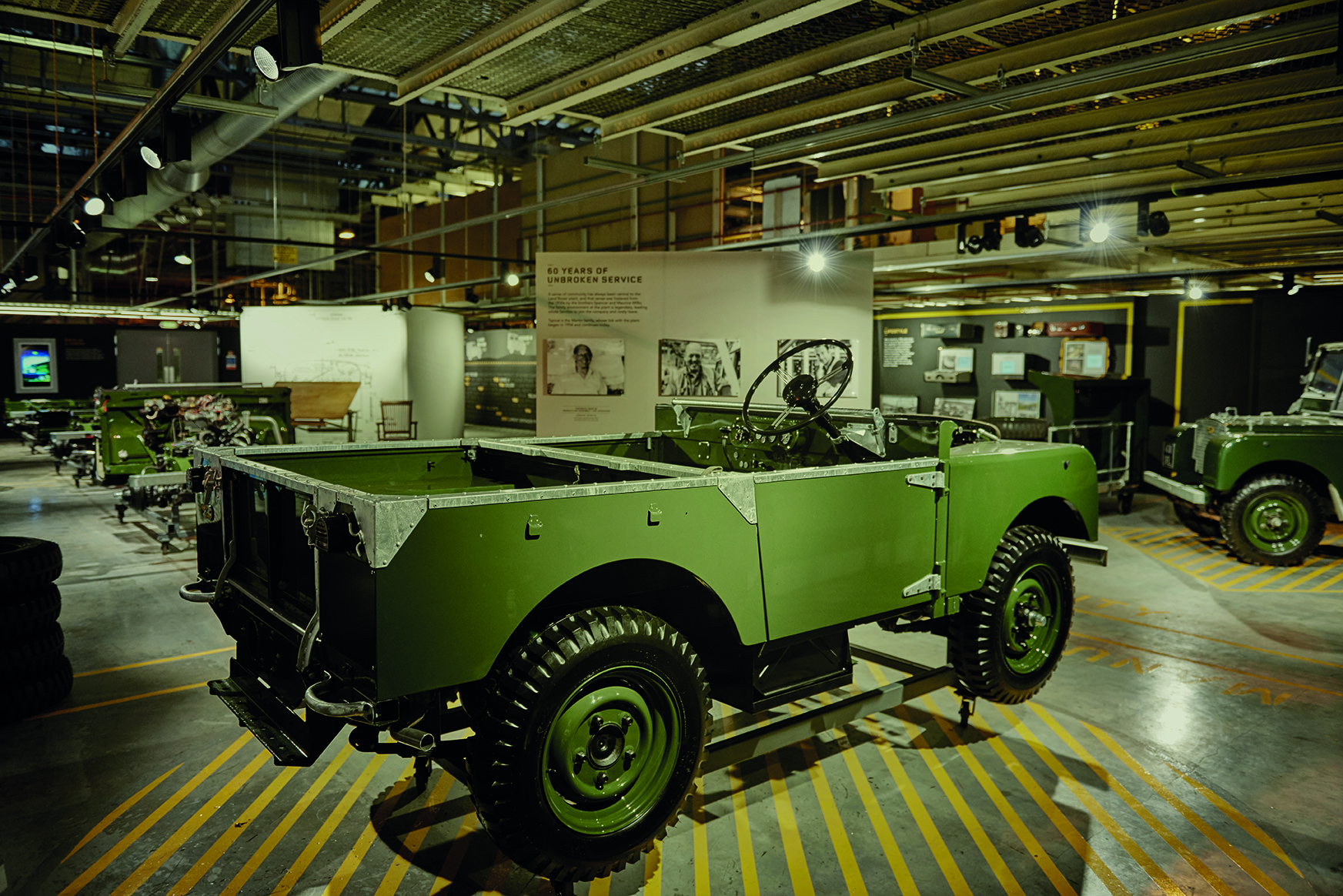 Car manufacturers tread a fine line when drawing on their history. If they evoke the past too much they are likely to be accused of being ‘retro’ and unimaginative; go the other way, however, and they can be labelled soulless and disrespectful of their heritage. It’s a little easier if your name is Land Rover and you have been producing, in the Defender, largely the same car since 1948. While just about every component has been changed down the years, the Defender is still one of the most recognisable shapes in the automotive world.

The vehicle is still built the way it always was at the Lode Lane factory in Solihull, UK, and there are two parts – an underfloor body stiffener and the rope cleats along the sides – which are the same now as when Maurice Wilks’ idea for an all-terrain vehicle for the Rover Car Company went into production three years after World War Two. Even the doors of the current Defender would hang perfectly on one built in 1990.

But all things are finite, and Solihull’s production of the Defender will cease at the end of this year. It will be an emotional time for all concerned; some of the employees are the fourth generation from their family to be involved in Defender manufacture, and one – Dave Martin – has worked on the car since 1970. Land Rover says the Defender’s lineage will continue, and there are reports that the current car may remain in production elsewhere for some markets, perhaps India; but the wonderful anachronism that is the Defender production line will disappear from Lode Lane.

As a sign of the affection in which the Defender is held, Land Rover has opened a Celebration Line in former storage space within the final assembly hall, alongside an exhibition area. This is a scaled-down replica of how the line would have looked when production first started (though insiders admit it is actually closer to how things were in 1949 because it was easier to get the parts for that year). The display is expected to attract 20,000 visitors before it closes at the end of the year.

Visitors can put on brown coat-style overalls (‘cow gowns’) like those worn on the assembly line in the 1940s, clock in just as the workers of the time would have done (and are given the clocking-in card as a souvenir) and can then visit the Celebration Line as part of a factory tour. There is also video footage of the creation of the Defender, supplied by Maurice Wilks’s family, plus photographs of the production line, technical drawings, a glass case full of 1:43 scale Defender models and artefacts from the period.

But the highlight is the five Series I Defenders in various stages of build on the mini-production line. This was created with the help of Land Rover enthusiast Phil Bashall, who owns the Dunsfold Collection of historic Land Rovers in Surrey. He sourced many of the parts, supplied others himself and helped to build the five Series I replicas.

Listening to Mr Land Rover
The idea for creating an historic Defender production line came from Roger Crathorne, a man known as ‘Mr Land Rover’, for an association with the company that stretches back to 1963. He first voiced his thoughts 17 years ago, not as an exhibit for the Solihull site but to take around the agricultural shows frequented by many Land Rover owners and enthusiasts. “It’s a pity we didn’t do it then, because it would have been much easier to get the parts,” he says ruefully. The suggestion cropped up again a couple of years ago, on the Defender’s 65th birthday, and this time a decision was made to mark the car’s passing at the end of 2015.

Three chassis were made, then the search began for the 8,000 parts needed for the partially assembled models on the Celebration Line. “The only thing we couldn’t get was bonnets, although I know someone who has six,” says Crathorne. “A lot of things we were able to get secondhand. Others have been made by one-man-band operations.”

The bodies were painted in the rectification area at Solihull, while the plant’s tool shop made the trolleys and dollies for the Celebration Line. The original company ledgers which were unearthed at the time of the 60th anniversary in 2008 supplied the part numbers, while the painstaking research to recreate an historic production line even found the old Rover asset register plates. And although there were no original technical drawings available for the display, Land Rover had had the foresight to microfilm everything when looking for more storage space a few years ago, which meant that new ones could be created.

The rest, says Crathorne, was simply a matter of putting it all together: “It’s just the world’s largest Meccano kit.”

A snapshot of Solihull today

Solihull’s 308 acres are now hemmed in by a housing estate and Birmingham International Airport. There is no room to expand, although the site’s 15-acre off-road testing areas remain sacrosanct. The plant currently produces around 1,000 vehicles a day, 100-120 of which are Defenders – demand is currently rising, largely for sentimental reasons.

The Defender line works a single shift, five days a week. The rest of the site is in operation 24 hours a day from Monday to Friday, with the occasional weekend shift to meet demand. Every vehicle takes around three days to complete.

Later this year, the Jaguar XE will be built on the same assembly lines as the Range Rover, taking annual body production at Solihull to 300,000 and completing the modernisation of the plant. The case for discontinuing such an anachronistic production system as that for the Defender is irrefutable, but no-one is looking forward to the day when it happens.

Emerging from the shadows
Solihull grew out of one of the World War Two ‘shadow factories’ commissioned to produce aircraft engines. There were 26 of these, located in areas least likely to attract the attention of the Luftwaffe. After six years of producing the Bristol Hercules 14-cylinder supercharged engine, Solihull was acquired by Rover to replace one of its bombed-out plants. In 1947, Maurice Wilks had an idea for a 4x4 Rover, which he sketched out on the sand at Red Wharf Bay in Anglesey. With £70,000 from the Rover board to develop it, the car came into being – known simply as the Land Rover until 1990, when the first Discovery was introduced. 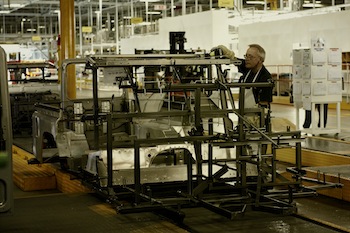 The Defender production line is like no other in the automotive industry today. There are no laser-guided body welding stations; no just-in-time parts deliveries; and not much in the way of automation. There are just six robots in the bodyshop, and none in final assembly, compared with 328 for the Range Rover.

Unlike the Range Rover, Range Rover Sport and Land Rover Discovery which are also built at Solihull, Defender panels are not pressed on site but brought in from outside suppliers. They are then drilled, rolled, folded, welded, riveted or bonded together in the plant’s East Works, where the aluminium monocoque for the Range Rover is also formed, on a separate production line.

Completed Range Rover bodies take a conventional route to the paintshop, but Defender body sections are loaded loosely onto skids to be painted. This means that the skids also get a regular new coat of paint which, over time, alters their size; periodically they have to be shot-blasted clean. Solihull’s paintshop is the largest in Europe and has 26km of track on seven floors. Range Rover bodies are transported by conveyor to final assembly, but the Defender skids are loaded into lorries and taken to the South Works.

The skids are then towed around on ‘parcel runs’, dropping sections of body at the appropriate assembly station. The Defender is, and always has been, an old-school body-on-frame 4x4. Its chassis used to be made on site, but is now delivered by GKN. Engines come in from Ford’s plants at Dagenham (diesel) and Bridgend (petrol), while gearboxes are supplied by Getrag. Then begins the day-long process of adding one of 308 possible permutations of body to the chassis. 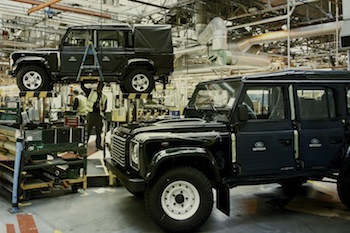 Even modern Defenders are made using old-fashioned methods, within a paper-based production system
Critical sections like the bulkhead and windscreen and door frames are fixed using jigs to ensure accuracy, but almost every operation still relies on the human eye, skill and experience. Workers on each station of the Range Rover line have 98 seconds to complete their tasks; for the Defender it is five or six minutes. There is a considerable amount of waste: empty skids rattle with bolts and shards of metal as they are towed away, and these cannot be recycled.

In addition, there are no computerised chips to ensure that the specification of each car is exactly as the customer ordered; everything is done from a paper job sheet. It is a production system at odds with the automotive industry of the 21st century, where every available technology is used to ensure precision and consistency in build, and automation reduces the strain of manual labour. Things are not exactly as they were in 1948, but they are still very different from what happens today in almost any other car factory.

The Defender Celebration Line is open to the public.