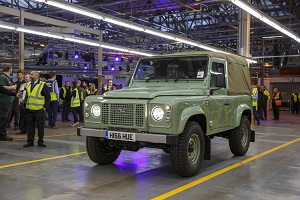 To mark the occasion, Land Rover invited more than 700 current and former employees involved in the production of Series Land Rover and Defender vehicles to the Solihull plant, which was displaying important examples such as the first pre-production 'Huey' Series I and the last unit off the line, a Defender 90 Heritage Soft Top.

"The world has changed dramatically in the last 68 years, but this vehicle has remained a constant – something no other vehicle can claim," said Nick Rogers, group engineering director at Jaguar Land Rover (JLR). "Creating the Defender of tomorrow, a dream for any engineer or designer, is the next exciting chapter and we are looking forward to taking on that challenge.”

Since 1948, more than 2m Series Land Rovers and Defenders have been built on the production line at Solihull. In 1958, the Series II introduced a fresh design and powertrain updates, including a new diesel engine which remained in service until the mid-1980s. Sales reached half a million by 1966, while annual production hit a high point of 56,000 units in 1971. The Series III continued with strong sales during the 1970s.

The Defender name was attached to the vehicle in 1990, by which time the Land Rover portfolio had expanded to include the Range Rover and the newly launched Discovery. Over its 68-year history, the model was diversified into variants including fire engines, lorry-like forward control vehicles, cherry pickers and an amphibious vehicle. In recent years, a Defender rolled off the line every four minutes, with each vehicle taking 56 man hours to build.

Land Rover is now establishing a Heritage Restoration Programme on the site of the Solihull production line. A team of 12 experts, including ten employees transferring from recent Defender production, will oversee the restoration of a number of Series Land Rovers from around the world. The first of these vehicles will go on sale in July 2016.

The end of production has also led to the closure of the Land Rover Celebration Line, a replica of the 1948 operation which has attracted over 10,000 visitors in the past year, according to JLR. The Defender production line tour is now available online.