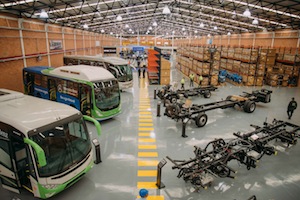 Colombia – The $2m factory at Funza, near Bogotá, covers 11,000 sq.m and has the capacity to make 4,000 units per year, supplementing the output of the company’s existing assembly facility in Bogotá, which launched in 2012. The new development will create around 220 jobs.

The Funza plant will assemble vehicles from CKD kits supplied by Mercedes Brazil at São Bernardo do Campo, the headquarters of Daimler’s production network for commercial vehicles in Latin America. Daimler Colombia will initially serve the local market with six chassis featuring emissions-reducing BlueTec technology. In the future, products will be exported to other countries in the region, such as Venezuela, Peru and Ecuador, plus Central America.

Hartmut Schick, head of Daimler Buses, commented: “In a currently challenging market such as Latin America, we are investing in the future viability of our locations and in modern vehicle technologies. With the new bus assembly, we want to further tap into market potentials in the Latin American bus vehicle business.”

The new plant joins a production network consisting of three factories in Brazil, at São Bernardo do Campo, Campinas and Juiz de Fora, plus one site at Buenos Aires, Argentina. Last year, Daimler Buses sold 17,600 units and claimed a 48.6% of the Latin American market. According to Daimler, the bus market in Latin America – the second-largest in the world – should stabilise at 40,000 units over the long term.