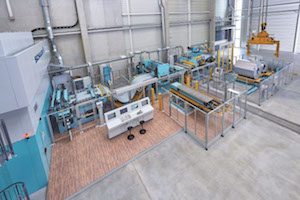 Germany – The OEM has commissioned two laser blanking lines at its Kuppenheim plant, in place of conventional lines with dies. The equipment will initially be used for the serial production of compact cars but can be quickly reprogrammed for other models in future.

In the Schuler system, three laser heads work in tandem to cut contours at more than 100 metres per minute from a continuously fed steel or aluminium coil. This yields surface-sensitive, pre-cut parts for mudguards, side components, roofs and engine hoods. The conveyor moves through the system at up to 60 metres per minute while cut blanks are separated from scrap and stacked. Two press lines form the pre-cut blanks into chassis parts which are then assembled in the adjacent Mercedes-Benz Rastatt Plant.

According to Schuler, space limitations in the coil hall at Kuppenheim meant that laser systems were a better choice than conventional blanking lines, which require foundations or a basement. The Dynamic Flow Technology offers easier assembly, freedom from heavy dies, forming optimisation and material savings, says the equipment provider.