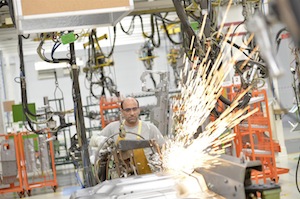 Portugal – The facility has produced over 200,000 vehicles during this time and, according to the manufacturer, has become the European “backbone” of the FUSO Canter, the best-seller in the Daimler Trucks product range.

Wolfgang Bernhard, board member with responsibility for Daimler Trucks and Daimler Buses, praised Tramagal as “an outstanding example of Daimler Trucks’ international footprint”. He said the collaboration between the 39,900 sq. m. facility and its partner plants in Japan and India “exemplifies the successful co-operation between Europe and Asia”.

Tramagal has received investments totalling €27m between 2011 and 2014 for the modernisation of production operations and the further development of the FUSO Canter. In 2014, €5.5m of this sum will be spent on new equipment and the development of the battery-electric FUSO Canter E-Cell. The Portuguese government is also offering €3m in support of these measures.