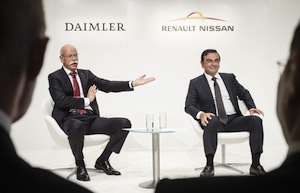 Germany – At the Frankfurt International Motor Show, the two companies said their collaboration had “accelerated and strengthened” as it entered its sixth year in 2015, with Renault-Nissan chairman and CEO Carlos Ghosn describing it as “one of the most productive in the auto industry”. Daimler’s chairman, Dieter Zetsche, added: “We co-operate when it is mutually beneficial. And that is the way we will keep it”.

The milestones of the collaboration in 2015 include:

– Groundbreaking for a $1 billion, jointly owned plant in Aguascalientes, Mexico, for the production of co-developed Infiniti and Mercedes-Benz vehicles from 2017 and 2018 respectively; over 230,000 cars will be made per year by 2020

– The development of a one-tonne truck for Mercedes-Benz, based on the Nissan NP300 but engineered and designed by Daimler; the vehicle will be built by Nissan at Renault Cordoba, Argentina, and Nissan Barcelona, Spain

– The launch of the Infiniti Q30, based on Daimler’s compact-car architecture but engineered and designed by Infiniti; production will begin at Nissan Sunderland later this year

– The emergence of electric versions of the smart fortwo and forfour, for sale from late 2016; the electric motors will be made by Renault Cléon in France, while the batteries will come from Daimler subsidiary Deutsche ACCUmotive in Kamenz, Germany.

Of the alliance, Ghosn concluded: “It has accelerated the time-to-market for vehicle launches and has been an obvious strategic advantage for each partner,” He added: “We look forward to its continued growth, with more joint projects in the future.”