Could Brexit mean business as usual? 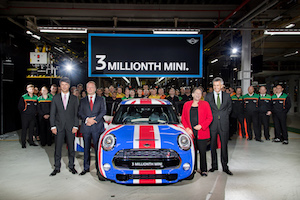 As the UK's competing EU referendum campaigns gather speed, it is fascinating to ponder the impact a vote to leave would have on the automotive industry. About a year ago, I would have said that the so-called 'Brexit' would be unremittingly bad news for the UK's automotive manufacturing sector. Now, I am not so sure. Leaving aside my personal preference for the UK to remain with the EU (largely because I think that leaving would be too big a leap into the unknown), recent news regarding investment in the UK automotive industry has been rather positive.

Industry leaders have been emphasising how the British automotive industry would do best if the UK stayed within the EU’s embrace. Continued access to the Single Market for vehicle-makers and component manufacturers would be assured without worries about disruption and the uncertainty of negotiating trade deals, tariffs or other barriers. To date, the idea of rapid disinvestment in the UK automotive industry in the event of a vote to leave has not been raised, but should the polls suggest that a vote to leave is likely, then such fears would likely be voiced.

The imminent referendum has, moreover, not prevented several recent investment decisions. Towards the end of 2015, Jaguar Land Rover (JLR) confirmed a £450m ($646.4m) expansion of its new engine plant in Wolverhampton. Even more recently, Nissan announced further investment at Sunderland: £26.5m for battery and next-generation Leaf production, and £22m to modify one of Sunderland's assembly lines to make the Qashqai on both lines, as the plant strains to meet growing demand for the model.

In Wales, TVR has announced that it will begin production in 2017 while Aston Martin has confirmed a new factory to make the company’s forthcoming SUV-crossover. Volumes planned by both companies are modest – less than 2,000 a year at TVR and under 10,000 at Aston Martin – but 4,000 jobs and the supply chain boost represent a fillip to South Wales. It is a region currently facing huge economic and social disruption with the potential closure of the vast Tata-owned steelworks at Port Talbot.

However, there are bigger fish to catch in the European automotive pond. Toyota decided to build its C-HR compact crossover in Turkey rather than the UK. While Turkey is, of course, not in the EU, vehicles made there can be imported to member states without tariffs. The decision to make this model in Turkey was only officially announced at this year’s Geneva Motor Show, though the investments to facilitate its production launch began almost two years ago.

More significantly for the UK will be what happens at Toyota when the current Auris and Avensis finish their model cycles towards the end of the decade. Tellingly, Toyota has not yet said what will happen at its Burnaston plant. The expectation has been that this UK factory will make models based on the new TNGA platform that underpins the C-HR, but any such confirmation will have to wait until after June 23.

So 2016 has seen continued growth in UK light vehicle production, and further growth is likely this year. Nissan, JLR, Aston Martin and (probably) TVR have increased their commitment to the UK in spite of the imminent referendum. However, further decisions – whether positive or negative for the UK – will most likely have to wait.