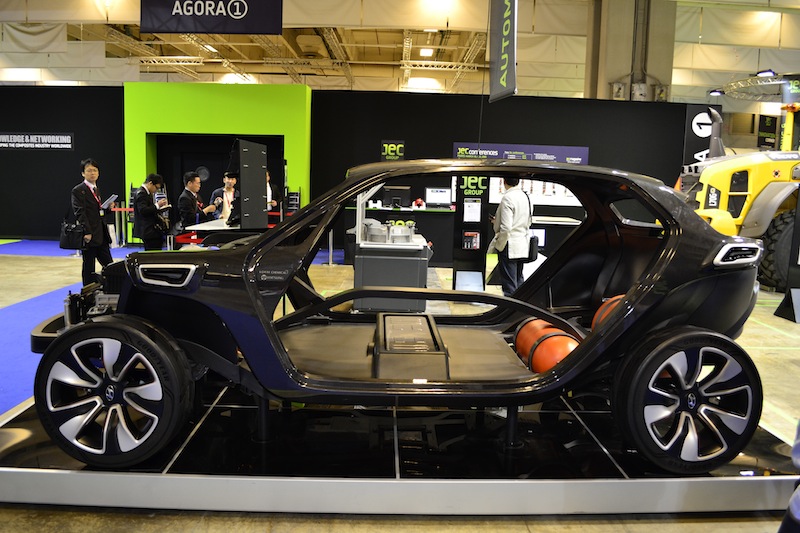 The automotive industry’s interest in composites shows no sign of waning; March 2015 saw two leading German OEMs positioning themselves to secure their futures with these lightweight materials. Far from resting on its laurels as the only carmaker to be mass-producing carbon fibre-reinforced plastic (CFRP) parts, BMW has signed a co-operation agreement with Finnish pultrusion and pull-winding specialist Exel Composites. At the same time, Volkswagen’s (VW) Porsche division has been looking to buy a 25% stake in part maker Capricorn Composite.

March also saw the return of the composites industry’s flagship event, JEC Europe, to the Porte de Versailles exhibition centre in Paris. In a sure sign of the current interest in composites, the show attracted no fewer than 36,000 attendees, a quarter of whom had connections with the automotive industry. As such, the 58,000 sq. m show floor was something of an autophile’s dream: BMW’s i8 sat resplendent on the SGL stand, with VW’s XL1 parked just around the corner; the single-seat BAC Mono was exhibited by parts manufacturer Arrk; and other companies chose Le Mans and Formula One racers to promote their expertise. The high-performance, the expensive and the exotic – all were on display.

However, one of the most interesting exhibits at the show was considerably more humble: a Citroen C3. Like all OEMs, PSA Peugeot Citroen needs to increase the fuel efficiency and reduce the CO2 emissions of its vehicles in view of stringent regulations being introduced around the world. In the US, the Corporate Average Fuel Efficiency (CAFE) standards mandate that new cars must demonstrate a per vehicle fuel efficiency of 36.6mpg by 2017 and 54.5mpg by 2025; the current average in the US is approximately 28.9 miles per gallon. Meanwhile, the EU stipulates that new vehicles must emit no more than 130 grammes of CO2 per kilometre driven by 2015 and 95g.km–1 by 2020. Currently, per vehicle CO2 emissions in Europe are in the region of 132.2 g.km–1.

PSA plans to meet these challenges in three ways: downsizing its powertrains; introducing hybrid powertrains; and reducing the weight of its vehicles – to which end it is evaluating the use of composites in structural applications. 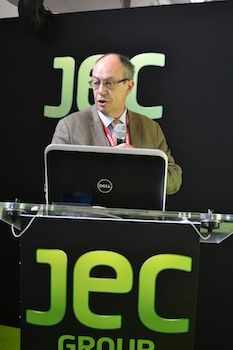 Speaking at the JEC Automotive Leadership Forum, the man in charge of evaluating lightweight materials at PSA, Charles Leroux, said: “There was an arms race amongst OEMs, with more equipment and bigger cars, which increased their weight. We stopped this in around 2011 with the new 208, which weighed 100kg less than its predecessor. The new 308 weighs 140kg less than its predecessor, as does the new C4 Picasso.”

The company is making solid progress on this front but will have to reduce the weight of its vehicles even more by 2025 to support the introduction of these smaller and more efficient powerplants. PSA will do so by developing a multi-material design strategy, employing lighter and higher strength steels (HSS) as well as increasing its use of aluminium.

According to market research firm Lucintel, composites accounted for only 1.4% of the total automotive materials market in 2014 and tend to be used in simple, non-structural applications. Leroux said: “For us, composites are the ‘joker in the pack’. We could reduce the weight of our cars by 150kg over the next 15 years using composites, but they are currently too expensive in comparison with steel and production processes are too slow.”

“There was an arms race amongst OEMs, with more equipment and bigger cars, which increased their weight. We stopped this in around 2011 with the new 208" – Charles Leroux, PSA

No ordinary C3
The C3 on the JEC show floor was not a standard model. It was PSA’s LC2 superlight vehicle prototype, fitted with a structural composite component – a front floor module – that the French carmaker claims could be suitable for mass production.

Catherine Tual, an innovation project manager at PSA, commented: “It was a big challenge to introduce a composite BIW [body-in-white] part into the production of the mass-market Citroen. This vehicle combines several new technologies and has around 200kg of weight savings.

"With the front floor module, we have replaced more than 30 traditional steel parts and reduced the weight of the BIW by 8kg, and we are currently working on an optimised design that would enable us to save 12kg of weight.” Moreover, Tual claimed that the part ­– developed in collaboration with components manufacturer Plastic Omnium over the last two years – can be produced at a cost comparable with that of the steel version it replaces.

The floor module is designed to absorb crash impact and fulfil other functionalities of BIW. It comprises just four composite parts, reducing assembly costs in comparison with the steel counterpart, and is produced in a cycle time of two minutes. It is made from a sheet-moulding compound (SMC) produced by Plastic Omnium, based on a vinyl ester resin reinforced with a high percentage by weight of chopped glass fibres.

The component is almost a drop-in replacement for its steel predecessor. Tual said: “PSA has also developed an innovative assembly process to replace the traditional steel welding point with glueing and screwing”. No pre-treatment is required to glue the composite module to steel parts.

Complete vehicles featuring the module have been tested as part of a large-scale validation plan that included: crash tests; noise, vibration, and harshness (NVH) tests; fatigue tests; vehicle handling tests; electromagnetic compatibility (EMC) tests; and car-body torsion tests. PSA has yet to evaluate how the module behaves in low-energy impacts, but Tual hopes the module will be used in production vehicles in the near future.

RTM for carbon fibre thermoplastics
At JEC, German chemical giant BASF and SGL announced the completion of a joint research programme to develop a carbon fibre-reinforced thermoplastic (CFRTP) for the cost-effective production of components via a thermoplastic resin-transfer moulding (T-RTM) process similar to the one BMW uses with thermosets to produce the monocoques of its i models. BASF and SGL claim that this material system enables the quick and easy manufacture of lightweight structural components.

Thermoplastics present a number of advantages to parts manufacturers over their more commonly used thermoset counterparts. They harden when cooled yet retain their plasticity; they re-melt and can be reshaped by reheating them above their processing temperature. This makes thermoplastics much easier to recycle than thermosets. In addition, once melted, thermoplastics harden quickly at relatively low temperatures, meaning that reinforced thermoplastic parts could be produced rapidly in short cycle times. They tend to be lighter than thermosets, they are highly resistant to impact and they stand up well to strain

However, the high viscosity of many thermoplastics prevents them from wetting fibre preforms in a consistent fashion, precluding them from the RTM processes favoured by many OEMs for the production of structural parts.

The newly developed CFRTP is based on a reactive polyamide (PA) system formulated by BASF. This PA is reinforced with carbon fibres from SGL that feature a coating – or ‘sizing’ – tailored to be compatible with this matrix. By employing a reactive PA system, BASF may have solved the problem of viscosity. 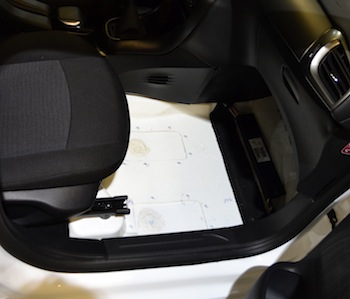 In 2014, the company published details of a T-RTM process it has developed in cooperation with VW and injection-moulding machine manufacturer KraussMaffei. To demonstrate the process, the partners produced a continuous fibre-reinforced PA B-pillar reinforcement, a part which is currently made by VW using HSS. The composite component is 36% lighter than its metal counterpart.

The reactive system comprises a caprolactam, an activator or a catalyst and other additives supplied by BASF in the form of two ready-mixed components. Above 70°C, the caprolactam melts and demonstrates a water-like viscosity which is lower than that of many epoxies. This enables the monomer to efficiently wet the reinforcement at an injection temperature of around 100°C.

The system then polymerises to a PA 6 in an isothermically heated mould in approximately two to three minutes. The injection and curing of the demonstrator B-pillar reinforcement took less than five minutes, and the project partners are confident that with further experimentation they can reduce this time still further. SGL Group and BASF are now looking at specific applications for their CFRTP material with their customers in the automotive industry.

There were a number of CFRP chassis on display at JEC this year. One of the most impressive was exhibited by an OEM more commonly associated with the budget end of the automotive market: Hyundai’s fuel cell-powered Intrado crossover concept has a chassis that weighs 50% less than the steel equivalent. Developed in partnership with carbon fibre manufacturer Hyosung, Lotte Chemical and braiding specialist Axon, the chassis (see the image at the top of this article) comprises continuous loops of CFRP that serve as self-contained modular frames for the roof, the bonnet and the apertures for the doors on either side of the structure.

By bonding these carbon fibre loops together along their lengths, the frame is strong and highly resistant to torsional stress. Running along the centre of the chassis is a ‘floating’ beam that increases the strength of the structure, connecting the passenger cell and the powertrain to the chassis, and serves as a mounting point for dashboard controls and protective padding.

Though impressive, the Intrado’s chassis remains a concept. At present, CFRP is too expensive for the vast majority of mass-produced automotive parts. According to Lucintel, a CFRP chassis is on average eight times more expensive to produce than the steel equivalent. However, the cost of CFRP components could be reduced through the development of alternative material systems and faster production processes. 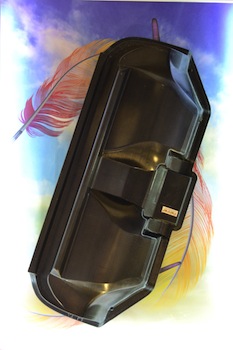 Forcing down cycle times
Meanwhile, Dow Automotive’s global strategic marketing manager, Peter Cate, revealed that the company’s Voraforce epoxy, introduced in 2014, has been assessed for use with wet compression processes and could enable CFRP parts production in cycle times of under 60 seconds.

Using the wet compression moulding process, a dry fibre reinforcement is placed in a mould and resin is applied on top of this reinforcement. The mould is then transferred to a compression machine, where the applied pressure infuses the fabric with the resin. Cate said that it takes 15­-20 seconds for resin to be applied to the reinforcement and 30 seconds for the part to cure – a total manufacturing time of less than 60 seconds. Furthermore, the use of multiple moulds with a single machine would allow resin to be dispensed onto one mould while another is in the compression machine, considerably increasing throughput.

However, this process is only suitable for producing relatively flat parts; more complex components would need to be processed by RTM. Dow hopes to implement its technology with an OEM by 2020.

The recent JEC show made it clear that the composites industry is innovative and agile, and has done much of the groundwork to meet the challenge of mass-production thrown down by automotive OEMs. It seems that in the near future, these OEMs will concentrate on the ‘low-hanging fruit’ of HSS and aluminium to reduce the weight of their vehicles, but as regulatory pressures increase and the costs of composites decrease, the automotive industry will be compelled to expand its use of these reinforced plastics.