Cleaning up the future

Under strong political pressure, the auto industry is sustaining its progress towards greener practices 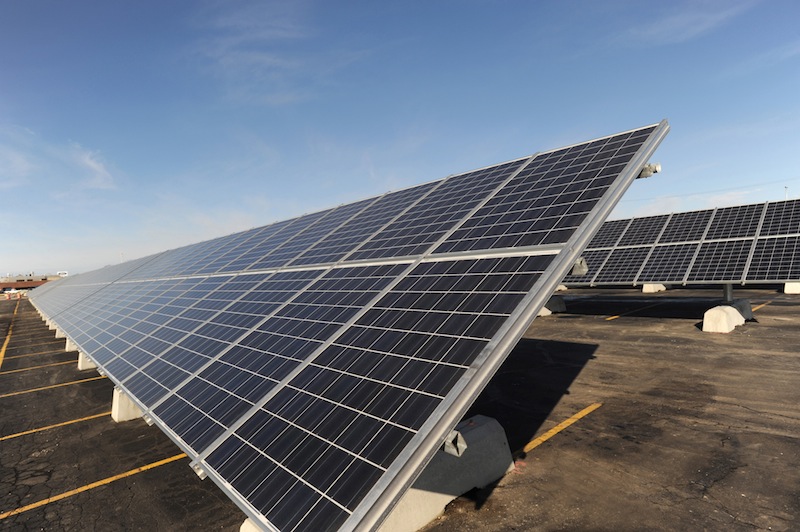 Automotive manufacturing is an energy-intensive business which has traditionally relied heavily on fossil fuels; PwC estimates that the industry is responsible for roughly 15% of global carbon emissions each year. While many automotive OEMs have had sustainable energy plans and goals in place for several years, they are now ramping up their efforts to meet these targets.

“Since 2000, when Ford unveiled its first Corporate Citizenship report (now called the Sustainability Report), the company has maintained a real commitment to sustainability,” says John Cangany, manager, sustainability communications at Ford. “Our fundamental purpose is to make people’s lives better, so investing in technologies that reduce our environmental impact around the world has remained a priority. We are actively involved in the installation, demonstration and development of alternative sources of energy. We also purchase renewable energy indirectly from utilities.”

Similarly, Eric Mauk, assistant manager, corporate affairs and communications at Honda North America, says: “Honda is always looking for ways that we can conserve energy, reduce the use of fossil fuels and decrease emissions created by the generation of power. Renewable energy usage helps us to move closer towards reaching those goals.”

“Take a look at the sustainability report of almost any large automotive OEM and you’ll see that almost all of them are now investing in one form of renewable energy or another to supply their manufacturing plants,” says Andy Brown, director, engineering excellence and innovation at research advisory company IHS Automotive.

“Early adopters such as Volkswagen initially focused on wind farms in the North Sea, and wind still remains one of the most visible investments. However, others have made notable investments in solar, biomass, geothermal and landfill gas projects, and the trend is increasing rapidly, regardless of region.”

Profiting from political pressure
A multitude of factors are driving the investment that Brown mentions, with governmental pressure being one key reason. The US administration set out its latest climate change policy in March, while the German government announced plans in December 2014 to accelerate efforts to meet its goal of reducing greenhouse gases by 40% by 2020 compared with levels in the 1990s.

However, more pragmatic drivers are also at work. Frost & Sullivan’s report stated that the price of renewable energy has declined dramatically in recent years, with the overall cost of solar photovoltaic modules, for example, having decreased by 70% between 2008 and 2013. “Initially, the use of renewables was seen as a great way to boost a company’s sustainability credentials in an industry that wasn’t always seen as the greenest, and perhaps as a way to safeguard against energy price instability,” says Brown. “However, it’s no surprise that the high levels of energy consumption at automotive OEMs has increased interest in this technology."

“Our renewable energy adoption has been influenced by the financial savings that we can now make compared to several years ago, as the cost is now comparable to brown energy [fossil fuels]” – Rob Threlkeld, GM 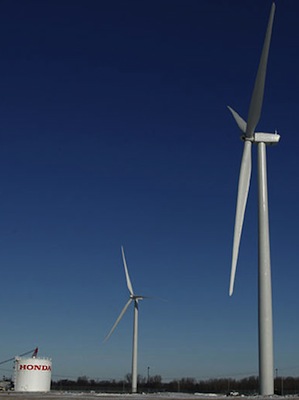 We are seeing a real interest in innovation and the use of new technologies in the automotive industry at the moment, and that’s a trend I only see increasing based on the conversations I am having, so it’s no surprise that there is also a desire to look at innovative ways to reduce energy bills. That’s only going to be compounded by tough regulations around emissions,” states Brown.

Rob Threlkeld, manager of renewable energy at General Motors (GM), confirms the monetary benefit: “Our renewable energy adoption has been influenced by the financial savings that we can now make compared to several years ago, as the cost is now comparable to brown energy [fossil fuels].” While cost is a major factor, so is brand image: consumers are increasingly conscious of the sustainability practices of the manufacturers from which they buy their cars. “As well as the obvious cost savings, one of the most interesting aspects is around consumer sentiment,” comments Brown. “We are seeing a real desire from the OEMs to get deeper metrics and analysis of consumer reactions to these investments and how they are affecting buying decisions. This could potentially lead to an opportunity for both lower manufacturing costs and increased sales.”

“We can see the benefits of marketing vehicles manufactured from clean energy to consumers,” says Threlkeld. “Our rooftop solar array at our Toledo Transmission plant in Ohio is a great example of this, as it can be clearly seen when driving down the Ohio Turnpike, reminding consumers of our commitment to sustainability.”

Overcoming core challenges
While most automotive OEMs are striving to implement renewable energy technologies to facilitate the move away from fossil fuels, this process is not without its difficulties. “General Motors has been involved in the renewable energy industry for more than ten years, but we’ve had our ups and downs,” confirms Threlkeld. “Leadership buy-in was one issue we had, especially because there were doubts about the longevity of renewable energy facilities.

“Previously the cost was also prohibitive and there were issues around energy market regulation. At General Motors, we committed to the Renewable Energy Buyers Principles to address some of these issues and to make it easier for organisations to buy renewable energy.”

Ford’s Cangany adds: “The biggest challenge, perhaps, is timing. There are many things we can do, but there is only so much we can do at one time. A good example of this prioritisation is the solar array we are installing at our World Headquarters in Michigan. While it is a big undertaking, there are significant benefits for employees and the community, and the renewable energy generated will help offset other forms of energy.”

At Honda, Mauk says that further challenges arise from the specific characteristics of each location and the prevailing environment conditions, which affect the suitability of some forms of renewable energy. “There are different challenges at different sites; some sites do not have the appropriate amount of space for a solar array, or a wind turbine,” he says. “Meteorological considerations play a role as well in determining the best fit for a renewable energy source.”

Projects coming on stream
The Frost & Sullivan report states that China, Turkey, Brazil, Vietnam, India and Russia will be the main contributors to growth in hydropower, owing to their natural resources. Indeed, there have been several interesting hydropower initiatives in recent years among leading automotive OEMs, such as the construction of a $59m hydroelectric power plant by VW in São Paulo State, Brazil. Having started operations in 2010, the plant now generates 120m KWh per annum and supplies 18% of VW’s national electricity requirements. A second plant is planned in the near future, so that VW Brazil can raise its in-house green energy supply to 40%, and 90% as a whole.

While hydroelectric power is not yet on a par with solar and wind in terms of global uptake, it is one of the most efficient sources of power. In 2011, BMW and carbon fibre manufacturer SGL Automotive opened a plant in Moses Lake, Washington, to produce this material for the automotive industry. The required energy comes entirely from hydropower, which is particularly cheap in the region due to clean-energy incentives. Closing the renewable energy loop, this carbon fibre goes into the production of the BMWi electric vehicle series in Germany. 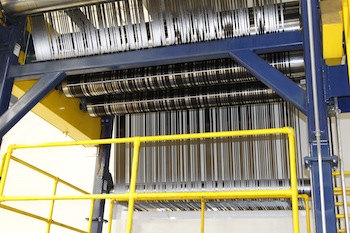 Last year, the OEM poured an additional $100m of investment into the Moses Lake plant, bringing its capacity to 9,000 tons of carbon fibre – triple the output at launch. As a whole, BMW used renewable sources for more than half the energy it needed for production last year.

Meanwhile, wind power has seen a real uptake in recent years and is perceived by many manufacturers and governments as having significant potential. The Wind Vision Report produced by the Office of Energy Efficiency & Renewable Energy in the US revealed that utility-scale wind turbines are already installed in 39 states, while wind energy accounts for 4.5% of the country’s annual electricity generation. The report goes on to state that wind could be a viable source of renewable electricity in all 50 states by 2050, replacing a significant amount of fossil fuels.

At Russells Point, Ohio, Honda Transmission of America uses wind turbines to generate more than 10% of its electricity. “The site in Russells Point sits on some of the highest elevation in the state of Ohio and is perfect for wind generation,” explains Mauk. It seems the advantages are numerous. “There is enough room in the surrounding area to allow us to construct two 260-foot towers without disturbing the community or endangering wildlife. The benefits of the power are one thing, but we have found that these turbines have helped increased employee morale as well, as they can be proud of working for a company that makes such a significant effort to help the environment.”

“The biggest challenge, perhaps, is timing. There are many things we can do, but there is only so much we can do at one time” – John Cangany, Ford

Solar power shining brightly
With the costs of solar energy falling so dramatically, there has been an upsurge in the installation of solar arrays at manufacturing plants. Last April, Ford and its partner DTE Energy turned on the largest solar array in Michigan, at the OEM’s World Headquarters. “The solar canopy will generate up to 1.13KWh of electricity annually, enough to power about 160 homes,” explains Cangany. “It also will cover 360 parking spots, including 30 plug-in stations for employees to charge their electric vehicles when at work.”

Ford is leading the way with its solar energy installations, both in the US and the UK. In Wales, the company’s Bridgend engine site was the first car manufacturing plant in Europe to be retrofitted with an integrated, grid-connected solar photovoltaic installation. The system has been in operation since 1998. 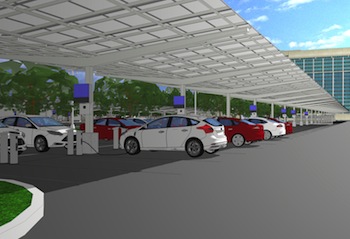 In North America, Ford’s renewable energy installations include a photovoltaic array and solar thermal collector at the Ford Rouge visitors’ centre in Michigan. Cangany explains: “The adjacent Dearborn Truck Plant has a ‘living roof’ system, which uses a thick carpet of plants to reduce the need for heating and cooling, while also absorbing rainwater.”

There is also a geothermal system at the Lima Engine Plant in Ohio, which “provides process cooling for plant operations as well as air tempering for employee comfort”. Cangany explains: “This system uses naturally cooled 40°F water from two abandoned limestone quarries located on the plant site. The installation cost was comparable to that of the traditional chiller and cooling tower design that it replaced. This project eliminates the emission of 4,300 metric tons of CO2 each year.”

“Initial investments in renewables were very much about taking a stake in an established technology or project,” says Brown at IHS. “However, the corporate goal for many OEMs of becoming carbon neutral means they are having to invest in increasingly cutting-edge technologies to achieve this. We see a real interest from these companies in what analytics we can provide around renewable technologies.