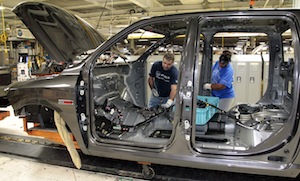 US – A requirement for increased capacity at the 76-year-old plant led to the revamp of 353 workstations, enabling five more trucks to roll off the assembly line every hour, or 100 more per day. With sales of the Ram 1500 on a 52-month streak, the Michigan facility will turn out an extra 28,585 units per annum.

The revamp of the plant, which began at the end of 2013 and continued during the summer shutdown this August, involved improvements across all facilities, including automation changes in the bodyshop and enhancements to the colour booths in the paintshop. However, Chrysler says it is the assembly line which has undergone “the most extensive transformation”.

The plant established a Work Place Integration (WPI) process, in which every task at each assembly workstation was reviewed, best practices were evaluated and processes verified. Together with the World Class Manufacturing system, WPI was used to redesign nearly all the workstations, correcting more than 100 issues which could potentially cause injury and moving nearly 300 parts to improve the ergonomics. Almost all the assembly line workers, representing 63% of the plant’s workforce, have now been trained in the new processes. This training resulted in 7,000 further suggestions to improve the efficiency of the line.

The use of kitting and limos on the chassis frame line and in the Motorhouse has speeded up and helped to error-proof the assembly process. “The employees actually like the kits,” commented plant manager Curt Towne. “They like the fact that they don’t have to walk as far to grab their parts, which is a waste. That’s time that could be spent building a truck.”

He added: “The kitting and limos allow us to optimise our workers and their ability to build a vehicle with precision the same way every time.”