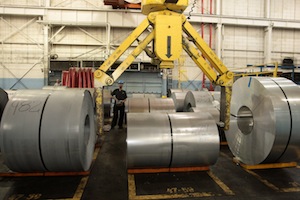 US – An investment of $63m will be used to purchase new equipment and increase capacity by 12,000 hits per days, or 3.6m parts per annum. The expansion at Warren, which already produces 80m parts per year, will support vehicle production at five North American plants.

Adding to the existing 12 major press lines and three large progressive lines at the facility, a new, 180-inch press line will feature the latest servo tandem press technology, with production set to begin in December 2015. Construction is already underway.

As well as increasing output, the new servo tandem press will reduce complexity, improve reliability and maintainability, and reduce energy use. Its servo press drive allows for 100% programmable control and movement of the ram speed at any position in the stroke, unlike a fixed-speed mechanical press. The tandem press comprises a series of presses, with a single die positioned in each press to perform an incremental function to make the stamped part.

“As production at our Chrysler Group assembly plants has nearly tripled in the past five years, we have been pushing our stamping facilities to keep up,” said Mauro Pino, vice-president and head of Manufacturing, Chrysler. “This much-needed investment for a new press line will help us continue to meet demand and maintain the quality that our stamping plants have worked so hard to achieve.”