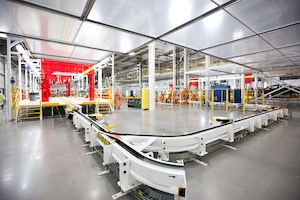 US – With the launch of the Chrysler 200, the vehicle-maker has in-sourced several key processes, added new content and implemented World Class Manufacturing (WCM). The workforce at the Michigan facility has increased by 800 to 2,800, more than double the complement in 2009.

Recent investments totalling nearly $1 billion have increased the manufacturing footprint to almost 5m sq.m, with the addition of a new bodyshop and paintshop. New machinery, tooling and material handling equipment have also been installed.

The Sterling Heights Assembly Plant (SHAP) was due to close in December 2010, but the plant was repurchased and production was extended to 2012, then indefinitely, and a second shift was added in 2011.

SHAP now has the capability to build multiple vehicles on two different architectures.