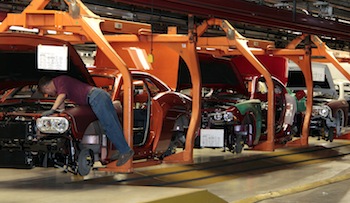 Canada – The OEM has notified Stephen Harper, Prime Minister of Canada, and Kathleen Wynne, Premier of the Province of Ontario, of its intention to withdraw all requests for financial assistance relating to the development of its two assembly plants in Ontario.

The vehicle-maker issued a statement saying the projects at Windsor and Brampton were being used “as a political football” in a process that “apart from being unnecessary and ill-advised, will ultimately not be to the benefit of Chrysler”.

The company added that it will “deal in an unfettered fashion with its strategic alternatives regarding product development and allocation” and will now fund the Canadian operations out of its own resources.

Sergio Marchionne, chairman and CEO, offered reassurance that Chrysler’s commitment to Canada “remains strong” but reserved the right “as is true for all global manufacturers, to reassess our position as conditions change”.

Chrysler has confirmed that it will allocate to Windsor the development and industrialisation of its next people-carrier architecture for a minivan and its derivatives. During 2014, Brampton will benefit from product intervention on the Chrysler 300 and the Dodge family that it already produces.