As the government steps up its efforts to ease the country's serious pollution problems, automotive OEMs are turning their operations 'greener' to improve their environmental footprints but also to help profits 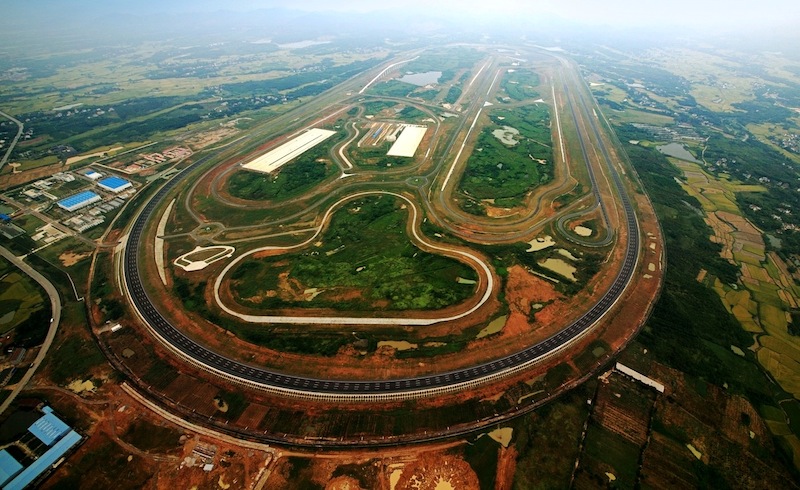 The severe pollution problems in China are well documented, with research from Tsinghua University in Beijing suggesting that an estimated 670,000 people died from smog-related diseases nationwide in 2012. Add to that the disastrous water situation, with figures from the World Bank estimating that half of China's population lacked basic access to clean and safe drinking water in 2013. As a result, the Chinese government has adopted a more aggressive stance in fighting pollution, introducing a raft of penalties for companies which fail to meet stricter standards, and subsidies for those that do. This is all against the backdrop of a country which has overtaken the US as the biggest global market for automobiles. What, then, does this mean for automotive manufacturers?

According to Neil Wang, global partner and managing director at research firm Frost & Sullivan Greater China, there are three main challenges faced by automotive manufacturers in China in terms of sustainability. The first is overcapacity due to the slowdown in growth of car sales, a somewhat new challenge given the previous high-purchasing rates in the country. This hurts a manufacturer’s bottom line and makes investment in new sustainable technologies and programmes more complicated.

“Manufacturers have continued to increase their production capacity since 2012, when the growth rate began to slightly decrease,” says Wang. “However, China’s 'new normal' in 2015 means that the automotive market is continuing to decrease. Therefore, some manufacturers seem to be confronted with overcapacity in terms of their production numbers.” The figures demonstrate the decline that Wang mentions, with the China Association of Automobile Manufacturers reporting that car sales in the country grew 6.9% in 2014, compared with 13.9% in 2013. Meanwhile, analyst firm PWC’s report into 2015 auto industry trends confirms that, while growth has slowed, OEMs are continuing to ramp up their production.

Wang cites a significant rise in air pollution and subsequent government regulations to tackle this problem as the second major challenge. According to findings from Deutsche Bank that were released in 2013, pollution levels in the country will rise 70% by 2025 compared with 2013 levels. “The increasing air pollution has led the government to implement a series of laws to regulate manufacturing, which makes it challenging for manufacturers to invest more to follow the government’s guidance,” he explains.

All of this has not been helped by local government decisions to limit new-car purchases and announce restrictions on the issuance of new-car plates in some developed cities due to traffic congestion. For example, the authorities in Shenzhen have limited the number of car licence plates issued each year to 100,000, with many of these coming through auction or lottery. Other cities in China which operate these limits include Beijing, Shanghai and Guangzhou. “To some degree, this has resulted in a reduction of revenue and profit for automotive manufacturers,” explains Wang.

“Thirdly, there is the social factor,” he continues. “The target consumers, especially the growing number of balinghou [the millennial generation], are becoming increasingly concerned about sustainability and environmental protection. Finally, you have the technical aspect. Engine manufacturing has come into the 'T' era, when the turbo-boost engine is the standard configuration for an energy-saving vehicle that produces less emissions.”

Volvo’s Chengdu plant in Sichuan Province, south-west China, which became operational in June 2013, is an example of how automotive manufacturers in the country have invested in sustainable operations to take advantage of these trends. The company uses a variety of methods including water treatment, energy management and paint equipment design to lower emissions to attain a level of sustainability which it says not only supersedes legal requirements in China but also sets an example to sister plants in Europe.

No compromise for Volvo
“Volvo has chosen not to compromise when it comes to environmental performance, and the factory therefore performs better than what is legally required in China,” explains Michael Ning, vice-president, corporate communications at Volvo Car China. “In terms of air emissions, which are mostly caused by paint operations, the Chengdu plant is designed to perform better than the average car factory in Europe. The paint operations in the plant are based on the use of mainly water-based paints and a state-of-the-art paint application equipment already used in our sites in Torslanda in Sweden and Ghent in Belgium.”

Ning adds: “The wastewater treatment plant in Chengdu is designed with both chemical and biological treatment steps before the water is released to a municipal wastewater treatment facility. This treatment level is required under Volvo standards and exceeds legal requirements in China. All air in the paintshop, including that from spray booths, is recirculated in order to reduce energy consumption.”

According to Ning, as part of the company’s zero tolerance approach towards environmental accidents, special focus has been placed on the design of areas where chemicals are stored and handled. “For example, fuel and oil tanks have been placed in specially designed underground storage facilities,” he says. “Energy efficiency is another area that Volvo has invested in, with a variety of energy management, energy monitoring, and lean energy principles, methods and processes implemented in the Chengdu plant, drawing on our experience from our European operations.”

With the release of its 2014 Sustainability Report in May, General Motors (GM) emphasised how it too has been extending its efforts in terms of responsible manufacturing practices in China, as well as increasing its investment in renewable energy. The report highlights the fact that the company has 11 landfill-free sites in China, which on average reuse, recycle or compost 94% of waste from daily operations and convert the rest to energy, with a small fraction incinerated.

The most recent of these sites to achieve landfill-free status, in 2014, was GM's Shanghai HQ. Meanwhile, 12 of the company's joint venture plants in the country have been recognised by the US Environmental Protection Agency (EPA) with its Energy Sustainability Tracking and Rating (STAR) award for industry. This requires plants to reduce their energy use by 10% in five years.

It was a busy 2014 for GM as regards sustainability initiatives; the company also opened Guangde Proving Ground, a 27,000 sq.ft garden that was designed to benefit pollinators such as bees and butterflies. It was the first facility in China to be recognised by the Wildlife Habitat Council for creating a wildlife habitat and enhancing biodiversity.

A sustainable supply chain
GM also extends its sustainability ethos to its suppliers. Through the Green Supply Chain programme, which was launched in 2005, the company is currently working with 27 supplier plants across China. This is the same approach that Daimler takes with its suppliers, regularly holding supplier events where the company discusses its sustainability requirements, as well as organising training programmes in the country to avoid any risk of non-compliance with local legislation. 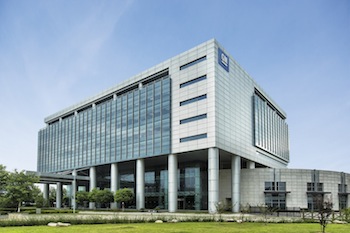 One of the ways that automotive manufacturers are ensuring sustainable operations is by designing new plants or redesigning existing sites with environmental protection in mind. In this vein, the Beijing Benz Automotive Company (part of the Daimler group) created China’s first zero-discharge paintshop for top coats at its MRA-II assembly plant, with energy-efficient technologies developed in Stuttgart, Germany, installed in the plant’s painting system. This reduces energy, water consumption, and the amount of wastewater produced, as well as ensuring that 80% of the exhaust air from the paint booths can be replaced with recirculated air.

Other green energy used in the plant includes solar and wastewater systems. The site now has solar-thermal systems for heating the water used in the sanitary facilities, as well as a photovoltaic system on its hall roof. There is also a rainwater harvesting system which reduces the strain on the municipal sewage system and enables the integrated use of rain water, plus a biological pre-treatment system. Pre-cleaned wastewater can now be discharged into the plant’s greywater system, which also receives water from the municipal sewage treatment facility. This water can be used for irrigation, flushing toilets or filling the firefighting tanks.

Meanwhile, Volkswagen opened a new plant in November 2014 that was optimised for both quality and environmental protection, as well as for manufacturing energy-efficient transmissions. Located in the city of Tianjin, northern China, the facility has an advanced water treatment facility that reduces process wastewater by up to 95% and also recycles the water that is used on site. Other green energy used here includes LED lighting in the factory hall that also almost halves power consumption, while natural daylight from light domes reduces energy use.

Water-saving initiatives are also key to Ford’s sustainability efforts in China. In two of its assembly plants in Chongqing, southwest China, the company has implemented advanced water treatment equipment to improve recycling. One plant recycles an average of 100,000 gallons daily, while the other recycles around 65,000 gallons.

Wastewater management
Ford has also implemented a membrane biological reactor and reverse-osmosis process at these sites to recycle water from its on-site wastewater treatment plants. At its third site in Chongqing, the company has been able to reuse more than 976,000 cubic metres of water. In 2013 alone, the company cut the amount of water used to make each vehicle by 15% in the region due to the implementation of these techniques. 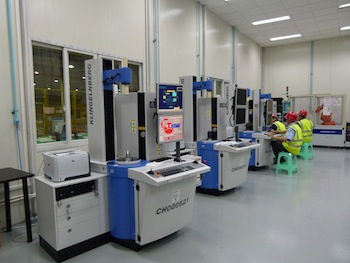 Aside from water-saving initiatives in arid regions, Ford has been opening new sites designed to promote more sustainable operations. In 2014, it opened a $350m transmission plant in the city of Changan, Chongqing, which uses advanced manufacturing processes to optimise environmental performance. For example, Ford’s minimal quantity lubrication process eliminates the need for cooling systems across most of the transmission production line and thus helps to reduce energy use. At the end of 2014, this plant was recognised under the US EPA’s STAR programme.

Balancing capacity
While opening new plants specifically designed to embrace sustainability is helping to minimse environmental impact, Wang believes companies will also look to better resource allocation as a way of tackling the need to go green, as well as that of overcapacity.

“Some auto groups will be able to make the best use of their internal resources to balance their production capacity,” he explains. “For example, Chinese automobile manufacturer Changan Automobile has reached an agreement with Changan Suzuki that it will share overcapacity to produce products of the same, self-owned brand. Some manufacturers are seeking those who have overcapacity to produce cars. Based on this trend, Frost & Sullivan forecasts that there will be more and more manufacturers with production overcapacity sharing their resources with those that have inadequate production capacity."