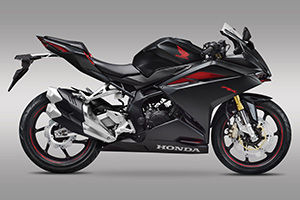 Indonesia – In a global debut, PT Astra Honda Motor will start producing the new, 250cc sports motorcycle, with local sales beginning later this year. The model will be the largest displacement Honda motorcycle manufactured in the country.

The CBR250RR features a newly designed steel pipe truss frame which Honda says “realises both strength and flexibility”. The swing arms are aluminium gull arms; the right-side version is shaped to reduce exhaust pipe extrusion, streamlining the motorcycle while retaining the banking angle. The suspension has high-rigidity inverted forks at the front and Pro-link suspension with five-step preload at the rear. An anti-lock braking system is available for both front and rear brakes. The wave discs have diameters of 310 mm and 240mm at the front and rear, respectively.

The CBR250RR was introduced as the Lightweight Super Sports Concept at the Tokyo Motor Show last year. Honda plans to release the CBR250RR in Japan at a later date.