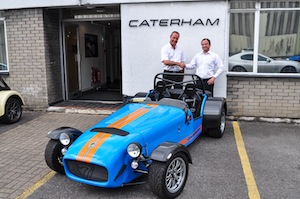 UK – Production ended on July 7, with number 174 destined for a distributer in Peru. The car was launched in 2008 and became one of its maker’s most popular models, attracting a number of celebrity clients. Half the production was exported, with Japan and Italy the largest markets, followed by France and Germany.

The 2.0-litre, 263bhp vehicle was capable of reaching 60mph in 2.88 seconds and remained the fastest Seven produced until the launch of the Seven 620 R in 2013. The newer model provides an additional 47bph, plus other technical enhancements.

Caterham Group CEO Graham Macdonald described the Superlight R500 as “a landmark model in many respects”, citing its performance on the road and track as well as brand impact. “It brought new technologies to the Seven range and was the first production Caterham to adopt a sequential gearbox.”

He added: “To some extent, it represented the start of a new era in which Caterham stepped into the 21st century, but it perfectly encapsulated Colin Chapman’s original ethos and harnessed our determination to provide accessible fun like no other.”