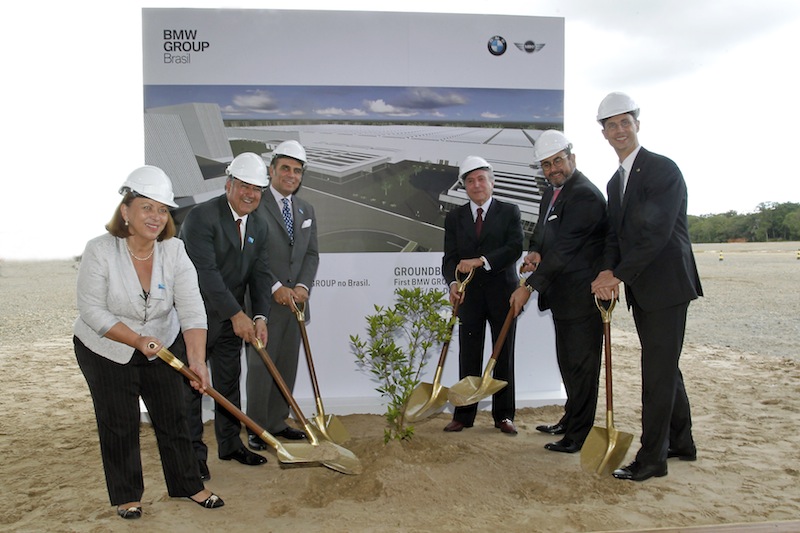 For almost two years, Brazil has been operating an auto industry stimulus programme called Inovar-Auto. In the minds of its government creators, this scheme promotes innovation, investment, efficiency and environmentalism in Brazilian car manufacturing; others regard it as protectionism by another name.

Inovar-Auto is both a carrot and a stick, with the twin goals of pushing OEMs to build cars in Brazil and luring consumers to buy more fuel-efficient vehicles. It has introduced large increases in taxation on all cars, especially imports, although manufacturers which conform to a lengthy set of regulations can ensure that their products avoid the charges. As for fuel efficiency, the scheme aims to improve the performance of new cars in Brazil by 12-19% by the end of the programme in 2017, using a formula based on fuel consumption versus mass.

The programme is part of the Plano Brasil Maior (Greater Brazil Plan), which aims to improve the competitiveness of many sectors of the Brazilian industry, not only automotive manufacturing. However, the country’s Ministry of Development, Commerce and Industry views increases in vehicle manufacturing and efficiency as a major component of the national priority to boost industrial competitiveness.

Brazil now has the fourth largest new-car market in the world, despite an 8.3% slump in sales in the first half of this year. But the level of imports has been looking unsustainable in a country with well-documented economic problems; even while the Brazilian car market was expanding at 12% a year at the start of this decade, imports were increasing at 46%, highlighting weaknesses in domestic manufacturing.

Incentives & disincentives
At a stroke, Inovar-Auto added a 30% tax to industrial products (the Imposto sobre Productos Industrializados, or IPI), except to those built in Mexico or the Mercosur countries. Moreover, the IPI increase was in addition to a 30% import tax and state taxes averaging around 18%. The IPI increase means that even a sub-1.0-litre car now attracts tax at 37% compared with 7% previously. Cars with an engine of 2.0 litres or more are taxed at 55%.

Brazilian government agencies have hinted at even stricter mandatory regulations to come after 2017, bringing environmental policies into line with those of developed markets, in particular the EU’s directive for fleet average CO2 emissions of 130g/km or less by 2015.

After the stick comes the carrot. The 30% tax rises can be negated if a manufacturer hits a series of targets, each of which earns tax credits. These are given for such criteria as meeting corporate fuel economy milestones, investing in R&D and introducing a tagging system. So far, 46 companies have signed up for the Inovar-Auto programme.

There are further credits for manufacturers who locate at least 12 of 14 production steps in Brazil. Among the processes which qualify are: body assembly and painting, powertrain and chassis manufacturing, final assembly and testing completed vehicles. By producing even more fuel-efficient models, manufacturers can gain up to 2% more in IPI tax credits.

Importers which do not have a Brazilian manufacturing base can bring in 4,800 cars a year under the existing tax regime, but every additional vehicle then attracts IPI at 55%. Brazil’s automobile import association, Abeiva, says that with extra duties some foreign-made cars will be taxed at rates as high as 340%. Other critics have labelled Inovar-Auto as just another means of taxing the consumer.

Pushing producers to go local
The effect of the programme has been to push OEMs into manufacturing locally. As Bernd Martens, Audi board member for Procurement, said when the company announced that it would resume manufacturing in Brazil at the Volkswagen (VW) factory in São José dos Pinhais, Paraná State: “Under the new policy it would be impossible to compete in this market without local production.” 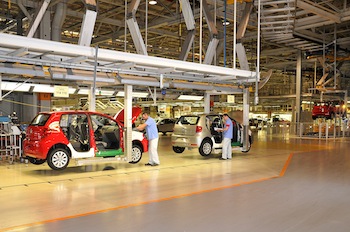 All of these new developments come on top of a number of facility launches in 2012, around the time when Inovar-Auto was announced: Hyundai at Piracicaba (São Paulo), Nissan at Resende (Rio de Janeiro) and Toyota with its third facility in the region, at Sorocaba (São Paulo).[sam_ad id=17 codes='true']

Anfavea, the Brazilian auto manufacturers’ association, has estimated that by the time all these plants are operational, the total investment in new production sites in Brazil could be as high as $35 billion and that vehicle manufacturing capacity will have increased by almost a third. “Today we have an annual capacity of 4.7m and we estimate that by 2018 the automotive industry production capacity will reach 6m vehicles per year,” says a spokesperson.

Yet the intended increase in Brazilian production has not developed as planned. First-half output for 2014 was down 17% on the same period last year, and Anfavea predicts that end-of-year sales will show a dip of 5.4% on 2013. The spokesperson attributes these results to several causes: the interruption of PSI, a government funding programme for trucks, buses and agricultural machinery; economic problems in Argentina, Brazil’s major trade partner; and low consumer and banking confidence.

“But we believe this is already overturned, and the expectation now is that the second half will be better than the first,” says the spokesperson. “Comparing the years, 2014 [sales volumes] will be lower than in 2013, but the second half is the turning point. In the first semester [half] of this year 1.66m products were sold in the Brazilian market and in the same period of 2012 [before Inovar-Auto started] the sales were 1.71m vehicles.

But, tellingly, he adds: “We cannot relate the results with the Inovar-Auto programme yet.”
The view from Brazil
– Giovanna Riato reports

Inovar-Auto has been running since the start of 2013 and is valid until 2017 but has not yet proven capable of achieving all expectations and promises. The policy was devised after strong pressure from consumers questioning the high price and low technological content of locally produced vehicles, compared with those sold in the US and Europe.

The government created Inovar-Auto to reduce this difference, to stimulate the local production of vehicles and components, and to raise the competitiveness of Brazilian vehicles to boost exports. But the main – and most controversial – measure of the programme, IPI Gordo, has turned into a heavy burden for companies operating in the local market. Even before the 30% increase in IPI, Anfavea says the tax burden for OEMs is 28.1% of the final price of a car with a 1.0-litre engine, and one of the highest in the world. Although the government has also created a means of exemption – qualification via Inovar-Auto – the requirements of this programme are challenging.

While the 4,800-vehicle limit on imports has pushed OEMs to establish local production sites, companies that are already established in Brazil must complete a series of progressive steps, including minimum investments in R&D, innovation and engineering. This does seem to be happening, as Anfavea estimates that within the $36.15 billion that will be invested in Brazil by 2017, as much as $5.2 billion will be allocated to R&D, engineering and innovation. According to Anfavea’s vice-president, Marcco Saltini, a drop in imports is already visible, with the market share of these models decreasing from 27% in December 2011 to 18% in June 2014.

“Inovar-Auto has had no effect on the auto parts industry”
– Paulo Butori, Sindipeças 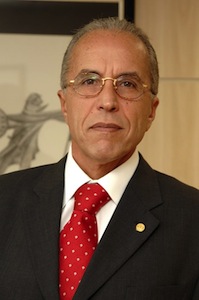 Meanwhile, Stephan Keese, managing partner of Roland Berger, says that the energy efficiency goals of Inovar-Auto are stimulating not only the development of new engines, but the democratisation of technologies such as start/stop systems and electric steering. Two models that can be held up as icons of the new generation of Brazilian vehicles are the Volkswagen up! and Ford Ka. These models are equipped with 1.0-litre, three-cylinder engines that promise better performance with lower fuel consumption and compete for sales in the entry segment, which, until now, was the last to receive new innovations and technologies.

But there remains the need to purchase a volume of parts locally, an aspect of Inovar-Auto which came into force only this August in a government attempt to invigorate the supply chain.

Stimulating suppliers
Data from the union Sindipeças shows the fragility of the auto parts segment. It is predicted that the total annual turnover, which in 2011 was 91.3 billion reais ($40.7 billion), will reach just 79.2 billion reais this year. Investments will dwindle from 2.42 billion reais to 1.03 billion reais, while the negative trade balance that has deepened in recent years will amount to 10.9 billion reais in 2014.

To prevent this crisis from worsening, the government announced that auto parts companies must state the price, features and imported content of each set during periodic audits. Failure to provide information will result in a penalty of 2% on the sale value, while the provision of incorrect information will attract a fine of 1% on the difference between the amount reported and the amount due.

These stipulations were announced only in August and the impact has yet to be felt. There are also problems with implementation. “Inovar-Auto has had no effect on the auto parts industry,” states Paulo Butori, president of Sindipeças. “We've worked hard, but without the commencement of local content checking, the system providers and automakers continue importing.” He says that a period of data collection by the government will be required before significant results can be achieved. 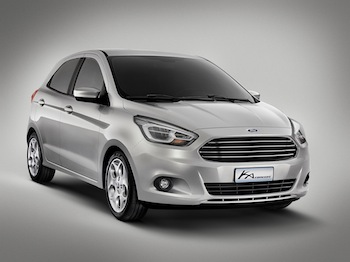 The Ford Ka is an example of the latest generation of more fuel-efficient yet stylish Brazilian vehicles
The consultant Stephan Keese, managing partner at Roland Berger, also casts doubts on the effectiveness to date of Inovar-Auto in changing the supply chain. He believes that OEMs have indeed made efforts to locate production of components within Brazil – but not due to the programme. “The appreciation of the dollar against the real becomes less competitive, so all companies are seeking national components.”

Anfavea wants local content checking to be enforced as soon as possible. “It is essential for Brazil to know which are currently imported auto parts and, maybe, induce the production of these components in the country,” says Luiz Moan, president of Anfavea and director of government affairs for General Motors Brazil.

The start of component origin checking could bring problems. Valter Pieracciani, managing partner of Pier Consulting, points out that some manufacturers will struggle to achieve the required criteria: “Not considering the four veterans of the Brazilian market [Fiat, VW, GM and Ford], other manufacturers cannot achieve the required level of nationalisation due to lack of production scale. Thus, they have to pay an additional 30% IPI on vehicles sold, which will be passed on to consumers, raising the price of vehicles.”

If this occurs, explains Pieracciani, Inovar-Auto will unintentionally benefit the four market leaders, since they are the only ones that will be exempt from IPI Gordo. However, he says that the government is working on a modification which could be applied to manufacturers selling fewer than 150,000 cars locally per year. 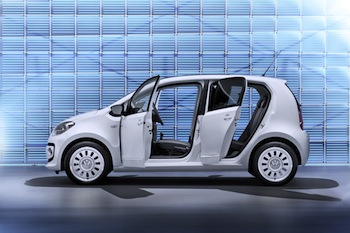 Inovar-Auto is aimed at encouraging the local production of modern, economical vehicles such as the VW Up!
According to Margarete Gandini, coordinator in the commission of the Ministry of Industry and Foreign Trade (MDIC) for agricultural and road machines, the automotive industry in Brazil remains in need of some adjustment despite the recent efforts of the government. “Inovar-Auto is the first step, not a finished work, and it is much more complex than what was envisaged when defining the project,” he says.

The commitment of the government to improve the programme has been noted by Pieracciani: “There is a great interest to complete aspects that are still open.”

The industry is currently debating the extension of the programme: ‘Inovar-Auto 2’. Pieracciani believes that the first phase has already resulted in an increase in local content, a strengthening of the auto parts industry, the evolution of national engineering and the arrival of more modern and efficient vehicles. A likely second step of the programme should in turn focus on setting more ambitious targets for safety within the domestic industry.