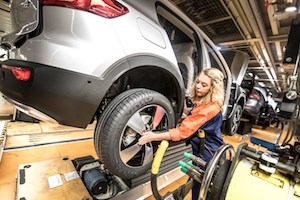 Sweden - Around 80,000 orders have been made for the XC40 since it was launched in late 2017. As a result, the OEM has announced it will expand production of the model, which is the first to be based on its compact modular architecture (CMA), at its Ghent manufacturing plant in Belgium and its Luqiao plant in China.

"The XC40’s success has surpassed even our highest expectations," stated Håkan Samuelsson, president and CEO of Volvo Cars. "The small SUV segment is the fastest-growing segment in the industry now, and with these additional CMA-based models we expect to benefit further from that growth."

The company has not yet revealed how it will expand output, and whether or not it will need to make any further changes to its plants. Before production began, a new bodyshop was built at the Ghent plant and 363 new robots were installed.

Volvo is also building a plant in South Carolina, US. It will be used to house production of the S60 and XC90, and potentially Lynk & Co vehicles.