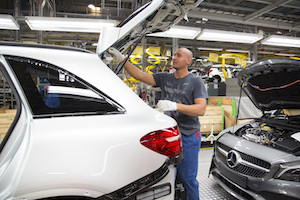 Finland – The manufacturing contract is described as being comparable in duration and extent to existing deals for the Mercedes-Benz A-Class and GLC SUV. The manufacturing engineering project for compact cars will begin immediately.

“The new manufacturing contract takes the cooperation of Valmet Automotive and Daimler to a new level, and consolidates the level of manufacturing orders at the Uusikaupunki plant for years,” said Ilpo Korhonen, CEO, Valmet Automotive. According to the contract manufacturer, the latest deal with Daimler has been signed at an earlier phase in the product life cycle than previous agreements.

The next-generation compact-car project will mainly involve modifications to the bodyshop at Valmet’s Uusikaupunki Plant, Finland, with changes to be made in the paintshop and assembly hall. Production of the A-Class, which began in 2013, will continue until the end of 2017 after the contract was extended. The GLC was added to the same line in February this year.

Markus Schäfer, member of the divisional board, Mercedes-Benz Cars, Production and Supply Chain Management added that: “Working with professional cooperation partners is an important strategic pillar in our flexible and efficient production network.”

Within Mercedes-Benz’ own production network, the lead plant for compact cars is in Rastatt, Germany; supporting locations are Kecskemét in Hungary and the joint venture plant in Beijing, China. An additional factory is being constructed with the Renault-Nissan Alliance in Aguascalientes, Mexico.