VW has been making vehicles at Puebla in Mexico since 1967, but a $1.7 billion investment has added new facilities for the Golf 7 and long-wheelbase Tiguan. AMS takes a look at a vast but still expanding footprint 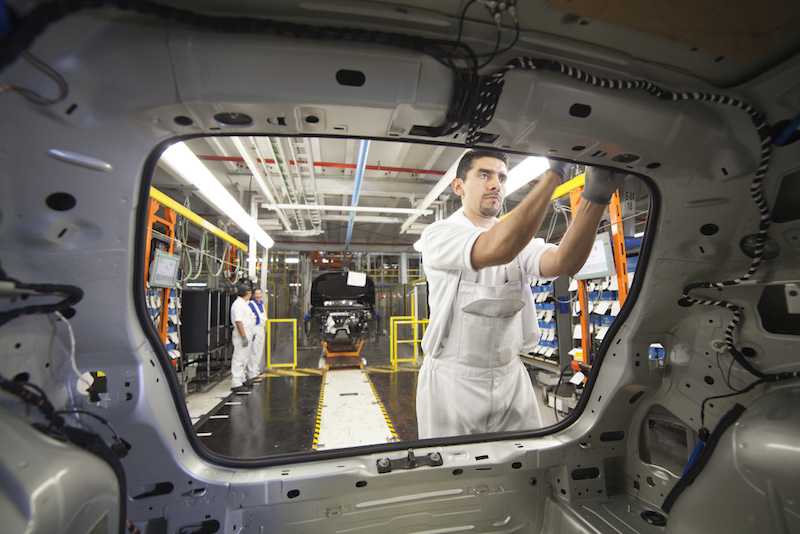 The automotive industry is a prime example of globalisation; major manufacturers span the world with their instantly recognisable brands, producing vehicles at a bewildering array of plants across various continents. Around the OEM factories, key suppliers cluster, bringing new opportunities for technology transfer and economic development. In addition to these well-known benefits, the presence of a high-profile vehicle-maker can generate a change in terms of the way people think about engineering, quality and management. The Volkswagen plant in Puebla is one of the largest automotive manufacturing complexes in Mexico, at 550,000 sq.m on 3m sq.m of land, and has been operating for more than 50 years; it is an excellent example of a catalyst for change in a developing region.

VW has invested around $10 billion in Mexico since 1964, and the full manufacturing complex at Puebla (including a stamping operation, foundry, engine assembly, multiple vehicle welding, paint and assembly facilities) plus the more recent engine plant in Silao, Guanajuato, have greatly helped the local economies in which they are situated. Supplier clusters have grown up in proximity to the plants, with many companies located on adjacent industrial parks, the better to achieve the just-in-time deliveries required by VW.

The introduction of the Tiguan SUV long-wheelbase (LWB) at Puebla, involving an investment of $1 billion, has provided added stimulus, with 11 local suppliers expanding their existing premises or constructing new facilities in the adjacent states of Puebla and Tiaxcala in advance of the launch of series production in early 2017. “The growth of the Mexican automotive industry is seen in the supplier companies at different levels and capacities,” explains Réne Cortes, spokesperson for Volkswagen de México (VWdM). “Being a country with several free-trade agreements, carmakers face the challenge of integrating the appropriate level of regional content specified for each agreement.”

VW has been manufacturing vehicles in Mexico for more than 50 years, investing around $10 billion in the country since 1964

Puebla's paint technology has been upgraded for the new Tiguan

At Puebla, VW has constructed a 70,000 sq.m bodyshop for the three-row Tiguan which features 800 Fanuc robots for welding, giving an automation level of 80% – similar to that of Volkswagen Group plants in Europe. This also matches the 49,000 sq.m bodyshop for the Golf 7, which was opened in 2014 at a cost of $700m and is equipped with 800 robots, mostly from Kuka. According to Cortes: “The technologies used here at the Puebla facility – laser welding, MAG [metal active gas] welding and sophisticated sealing processes – are similar to those used in the other plants in the Group.”

Among the developments introduced as part of the Tiguan project, VW is especially proud of the enhanced automation in the paintshop. Sophisticated equipment has allowed significant improvements in paint application, especially to the body interiors. Elsewhere, new robotic systems developed in partnership with suppliers will offer enhanced flexibility in the production process and enable a tailored response to market requirements.

New technologies demand an evolving mix of workplace skills. VWdM has its own training school where technicians and apprentices undergo comprehensive programmes in key topics such as industrial electronics and industrial mechatronics. The introduction of the Tiguan LWB has triggered a technical training programme involving over 90,000 manhours, drawing together staff from across the plant at all levels, along with apprentices, to ensure that production and quality targets can be met. Explaining the importance of workplace development, Cortes says: “We face large-scale complexity in the automotive industry, where technical qualifications and technical efficiency are crucial to master the challenges.”

Bringing the Tiguan into a sustainable operationThe Puebla plant participates in VW’s ‘Think Blue. Factory’ initiative, through which the company sets targets for sustainable operations. The overall objective, to be achieved by 2018, is a reduction in environmental impact of 25%. This will include a 25% reduction in energy and water usage, and a similar decrease in waste volumes and plant emissions. VW is already claiming significant success with this programme; the 2018 targets are close to being achieved in some areas already. According to the vehicle-maker, energy utilisation is being completely transformed under the ‘New Future-oriented Assembly’ construction programme. 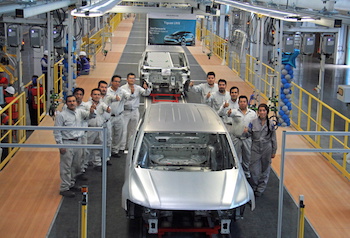 At Puebla, the new facility has helped to progress these aims. In the design of the Tiguan bodyshop, VWdM has made extensive use of natural light and this, along with more efficient machinery incorporated throughout the facility, has resulted in significantly reduced energy consumption. In particular, VWdM points to its standardisation of processes – incorporated within the Modular Transverse Matrix (MQB) concept – as a route towards better utilisation of resources. Enhanced production efficiency and closer control of quality means less rework and less waste, with accompanying benefits in terms of energy and material use.

It would be inaccurate to regard the globalisation of manufacture as a simple quest for lower labour rates. Like most OEMs, VW is committed to high levels of technical sophistication, with the benefits of locating in Mexico being more about access to market and tariff advantages. Of course, the current political climate in the US, and to some extent in western Europe, is undergoing considerable change in matters of trade. Accepted wisdoms about free-trading relations, which have underpinned the globalisation process, are coming under serious challenge for the first time in many years. In a situation where trading patterns are changing, the level of uncertainty for manufacturers is high.

Integrating the MQB platformFor VW, the state-of-the-art MQB platform will be key to future development. This modular system is the cornerstone of the new bodyshop and related logistics facility that has been developed in Puebla. Working with Fanuc, a highly automated range of welding robots, transportation systems, and quality checking and measuring devices has been incorporated to ensure that the plant is capable of meeting the most stringent quality and production targets. The Tiguan project is a top priority at the moment, with Cortes stating that “everybody is focused on the start of production”. The assembly lines will have a capacity of 770 units per day and the output will be sold mainly within the Volkswagen North American region, but also in other global markets, with the exception of China.

VW has used the experience gained during the establishment of its new bodyshop for the Golf 7 to fine-tune implementation of the MQB concept for the Tiguan; the Golf 7 was the first vehicle made on this basis in Mexico. New patterns of movement for materials and extensive reconfiguration of the assembly lines were all required to realise the potential of this modular concept. In June this year, VW announced that Puebla had assembled its first test body-in-white for the Tiguan LWB, using it to check the calibration of bodyshop equipment and processes. By that stage, the OEM had almost finished the installation of new machinery, ahead of full production in Q1 2017.

“Localisation has become key to safeguarding our competitive position on the global market and manufacturing the Tiguan in Mexico will bring production closer to the US market,” said Michael Horn, then president and CEO of Volkswagen Group of America, at the investment announcement in March 2015. “With production of the Golf A7 and the Tiguan now moved to Puebla, we will build approximately 90% of our products in the NAFTA [North American Free Trade Agreement] region.”

VWdM is part of the Volkswagen North American region formed in April 2016, through which the company is seeking to strengthen its activity in the US, Canada and Mexico. At the announcement of the new structure, Herbert Diess, CEO of Volkswagen Passenger Cars said the new arrangements would be “offering the United States, Mexico and Canada more freedom and more responsibility than ever before”. Whatever comes next, VWdM, with its vast and ever-developing Puebla complex, is well-placed to meet the challenges and opportunities that lie ahead.