Recognising at an early stage China’s growing role in the automotive industry, schwartz is enjoying year by year growth in its heat treatment systems operations in Kunshan 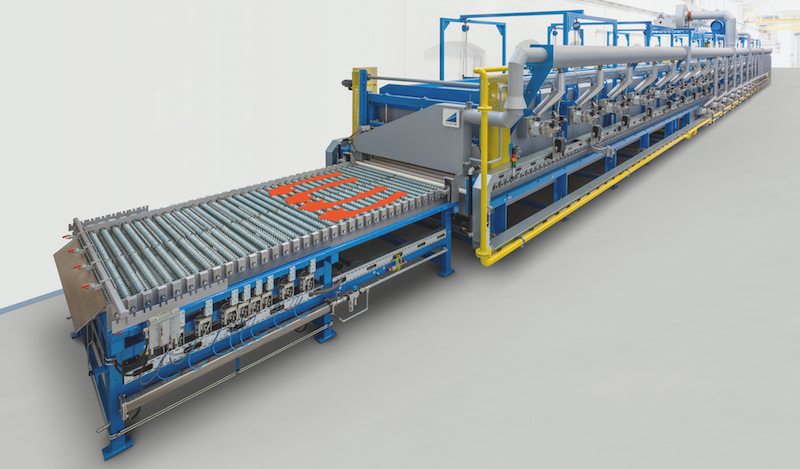 Earlier this year, a heat treatment equipment reconstruction project was completed by schwartz HTS, the group’s China subsidiary. A 10-year-old try-out furnace at Baosteel based in Shanghai was modified with a 10-metre long extension to a full production furnace. It comprised a bearing purging system, protective atmosphere, automatic centring station and new PLC control.

It’s the first time that schwartz HTS has carried out such complex modernisation project, successfully achieving customer satisfaction from Baosteel. After the tests completed regarding the product quality and safety, the plant manager Mr. Tang Feng showed great appreciation of the skills and attitude of the experienced schwartz team.

As a specialist in heat-treatment equipment for press-hardening, the globally active schwartz group has evolved into a key supplier to the automotive industry. Further enhancing its service to manufacturers in the Asia-Pacific market, the company’s Chinese subsidiary remains committed to expansion.

To the automotive industry, there is likely to be no more important market than the Asian-Pacific one. In China alone, with an output of close to 28 million units, more passenger cars are built every year than in the whole of Europe. The schwartz group, recognising this potential at an early stage, has continued to expand its business with China in recent years.

For more than 30 years, schwartz has been manufacturing heat treatment systems for the automotive industry, mainly for press-hardening and aluminium applications. Each of these fields of technology is essential in lightweight automotive construction, benefitting both vehicle body and suspension design. Press-hardened steel body parts, while protecting occupants in the event of a crash, also enable car makers to build lighter vehicles to achieve lower emissions and consume less fuel.

Since its foundation in 1984, schwartz has grown into a global-scale industrial group. In the course of its history, the company has built more than 1,000 heat treatment systems, including over 250 just for press-hardening steel components.

Today, the group that evolved from the original single enterprise employs a workforce of around 200 people at seven global sites. Four of these are located in China, while two operate in Germany and one is situated in the US.

Overall, the group commands 21,000 sq.m of manufacturing floorspace including 4,500 sq.m at its headquarters plant in Simmerath, Germany. All equipment design for the entire schwartz group takes place here and at the company’s wholly-owned subsidiary, Hütte of Aachen, Germany. It is thus ensured that all systems are designed to the same quality and “Made in Germany” standards. In line with this commitment, every schwartz system is carefully matched to the customer’s production needs.

Its Chinese subsidiary, schwartz Heat Treatment Systems Asia (commonly abbreviated to schwartz HTS), was established as early as in 2011 at Kunshan near Shanghai with the aim of providing still faster delivery and more individualised support to customers in the Asia-Pacific region.

The site comprises 2,500 sq.m of floorspace dedicated to the assembly and starting-up of heat treatment equipment.

To date, schwartz HTS has supplied heat treatment lines to 30 customers in the Asia-Pacific market, delivering equipment to different production sites in countries including China (including Taiwan), Japan, Korea, Malaysia, India and Vietnam.

In its five-year history, schwartz HTS has built and supplied around 35 heat treatment systems and integrated them into customers’ production environments.

Each system built by schwartz HTS is manufactured in accordance with German standards and with the same high quality as the products coming from the Simmerath and Aachen sites in Germany.

Apart from installation and commissioning, schwartz HTS offers user-specific services and a wide range of spare parts, thus helping its customers to benefit from the full performance of each schwartz heat treatment system at all times.

By now the head office of schwartz HTS in Kunshan has grown into one of the region’s most important industrial enterprises. This was confirmed once again this year by the regional government’s visit to schwartz HTS.

It’s the sixth year of schwartz’s operation in China, with the company’s performance rising year by year. Earlier this year, a TV crew visited schwartz HTS for an interview and report broadcast on the local Kunshan station. Speaking to camera, schwartz general manager Mr. Mierswa gave an overview of the company and invited the crew to visit the workshop.

To further improve its closeness to the customer in the Asia-Pacific region by relying on Chinese sales staff, thus also simplifying communications, schwartz HTS opened its Sales Office in Beijing in 2015.

Early in 2017, two dedicated customer-service bases were set up in Chongqing and Guangzhou. As a result, the company can now offer even faster service to customers in west and south-west China. Moreover, many production-relevant spare parts are stocked locally. These items can hence be made available to the customer, and fitted and commissioned by experienced service technicians, in minimum time. The intention now is to open another additional customer-service site at Beijing by the end of 2017. Through this additional site, schwartz HTS will further expand its service network while offering its customers still faster turnaround times and hence, further increased equipment availability rates.