Germany - Porsche is to invest significantly more funds into its electromobility development to produce both plug-in hybrids and purely electric vehicles at its Zuffenhausen plant. The move will see the Stuttgart-based OEM take its expenditure on e-mobility from around €3bn to more than €6bn ($7.4bn) by 2022.

Announcing the investment, executive board chairman Oliver Blume said: “Alongside development of our models with combustion engines, we are setting an important course for the future with this decision.”

The outlay will centre on the development of Porsche’s Mission E variants and derivatives, the electrification and hybridisation of the existing product range, plus new technologies, charging infrastructure and smart mobility.

Several hundred million euros are earmarked for the expansion of Porsche’s production sites. At the Zuffenhausen plant, a new paintshop, assembly area and a conveyor bridge are currently under construction. The existing engine plant and bodyshop are also being repurposed and investment is planned for the OEM’s R&D centre at Weissach.

Speaking to the German media, executive board member for production Albrecht Reimold said that initial production equipment for the Mission E sports car will be installed on site in early 2018 with start-of-production scheduled for 2019.

Reimold told Automobil Production: “Everything is running to schedule. Traditionally, Zuffenhausen was all about the Porsche 911. But step by step, we have integrated the 718 model lines into production and we now build all of the two-door sports cars at the main plant again. In order to satisfy the high level of demand, some of the production for the 718 Cayman – overspill production – is carried out at the VW site in Osnabrück."

"That will continue in 2018, as the success of the 911 means we are running at peak production in Zuffenhausen. When I joined Porsche exactly two years ago, we were building around 200 sports cars each day. The figure now is 250 vehicles per day; an increase of around 25%.”

Reimold praised colleagues and suppliers working on the expansion as, despite the vast scale of the redevelopment, disruption of existing manufacturing operations at the site has been avoided.

He said: “I have worked in the automotive sector for 30 years now, but I have never been involved in anything like this, with a complete restructure taking place alongside normal operations. Or, to be more precise, alongside a plant operating at maximum production capacity. The construction companies and our planners are delivering a logistics master class every day.” 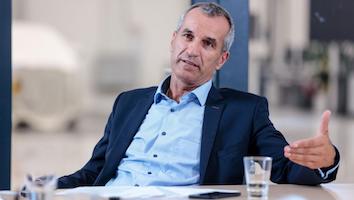 Members of the production team are involved in the pilot phase, Reimold explained, so that experience can be gained at an early stage.

When asked why Mission E is proceeding as an individual project rather than as part of a flexible manufacturing process, Reimold reiterated the increase in volume on the 911 lines, citing this as the reason not to seek further expansion at the existing Zuffenhausen line.

He said: "If we were to decide tomorrow to manufacture this type of electric vehicle in Leipzig, we would integrate it into the existing line; we see that as the best way. But our sports car production at Zuffenhausen – as I've already outlined – is currently at full capacity. That is why we have decided on a second line. But that has nothing to do with wanting to make it in isolation.”