Panamera made completely at Leipzig 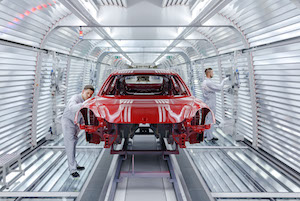 Germany – The Porsche factory in Saxony will take over the production and painting of the new-generation bodies-in-white from Volkswagen Hanover, which has held this responsibility since the launch of the model in 2009. Previously, Leipzig undertook the pre-assembly and final assembly.

Porsche has spent around €500m ($556.4m) on a fourth expansion at Leipzig, including the construction of a new bodyshop covering 56,000 sq.m. The OEM also made changes to assembly and the plant infrastructure, as well as establishing a new quality centre. The workforce was expanded by 600; by autumn, the site will employ more than 4,000 for the first time.

Sustainability measures incorporated into the expansion include: energy-efficient joining technologies in the bodyshop; a solar array generating up to 800,000kWh of electricity per year; modern methods of cooling robotic welding tongs, reducing electricity consumption by 365,000kWh per annum; and a stone-dust filter system, enabling energy savings of 60% in comparison with water-based systems.