Much R&D work has been done to reduce the weight of vehicle structures, but closures still represent a significant opportunity for weight savings 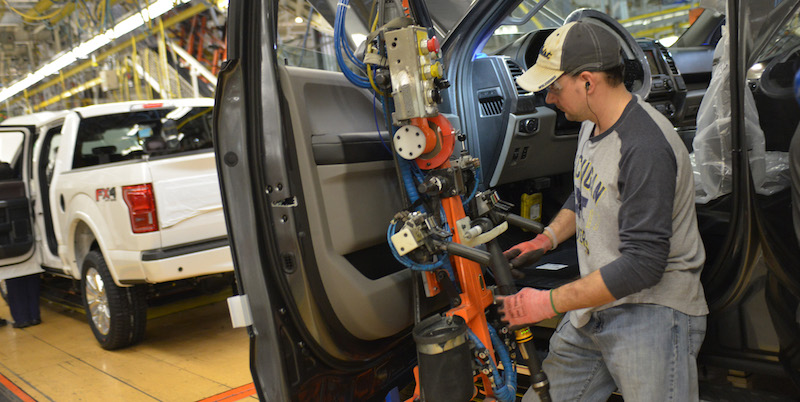 Closures are mounted after body assembly and can be built up off-line, meaning that they can be made of entirely different materials, such as aluminium, to the vehicle’s body structure. And in the case of doors, the weight savings can really stack up.

At the 2017 North American International Auto Show, Magna International announced that – in partnership with the US Department of Energy (DoE), FCA US and interiors specialist Grupo Antolin – it has developed an aluminium-intensive door architecture that is 42.5% lighter than those used on the Chrysler 200. When all four doors are considered, this amounts to a weight saving of around 50kg compared with a stock Chrysler 200, says Tim Skszek, senior manager for government partnerships at Magna International.

Further, he points out that the doors are manufactured using readily available materials and can be made using existing manufacturing processes, without a significant increase in production costs or changes to the infrastructure of the bodyshop. This door architecture is applicable to 70% of the light vehicle market.

Capping incremental costThe project was completed in less than ten months. It was awarded and part-paid for by the DoE, which is looking to fund cost-effective means of meeting the increasingly stringent environmental and fuel regulations in the USA.

Guidelines associated with the award stipulated a 42.5% reduction in mass compared with a current 2016 production door and that the incremental cost could not exceed $5 per pound of mass saved. This increase in cost is a little more than an OEM would likely accept, says Skszek, but it enabled the evaluation of technologies that are not yet mature.

After it was awarded the project, Magna selected its partners. The company demonstrated its lightweighting know-how during the development of the Multi-Material Lightweight Vehicle (MMLV) with the DoE and Ford in 2014. This vehicle featured a door made from aluminium sheet and extrusions, magnesium high pressure vacuum die cast parts and steel sheet held together with structural adhesive bonding (hem and structure), self-pierce rivets (SPRs), single sided rivets and bolts. This door was some 33% lighter than that of the baseline 2012 Ford Fusion.

The Magna Closures, Magna Exteriors and Cosma divisions all took part in the project. Grupo Antolin has extensive experience manufacturing lightweight interiors. For its part, FCA has already used aluminium to reduce the weight of its vehicles. At some 1,957kg, its 2017 Chrysler Pacifica is around 113kg lighter than the Town & Country minivan it has replaced. FCA has saved approximately 18kg just by using aluminium panels for the sliding side doors. Its engineers have saved additional weight by using aluminium knuckles and an aluminium control arm in the front suspension, and the lightweight metal is also used in the vehicle's liftgate.

The final option proved to be the most cost-effective. The door-in-white (DiW) accounts for 45% of the mass reduction achieved by the project. Skszek says: “This design from a metallic perspective is all aluminium; three different alloys and three different processes.”

The A-pillar structure is what Skszek describes as "the structural corner stone of the door". It is manufactured from Cosma's Aural-2 alloy (AlSi10Mg), which demonstrates a yield strength of 120MPa, a tensile strength of 180Mpa and an elongation of 10%. It is manufactured using Cosma's High-Q-Cast high-pressure vacuum die casting process, which the company acquired when it bought BDW Technologies in 2012.

The conventional high-pressure die casting process is used for manufacturing complex parts with wall thicknesses of 3-8mm. These parts require minimal finishing, making the process suitable for high-volume manufacture. Using the process, molten metal is injected into a die at high velocity, meaning that air in the cavity gets trapped in the aluminium, leading to the formation of pores that affect both the tensile strength and elongation of the finished part –limiting their use in structural applications. Further, the heat treatment of these parts can cause further defects, such as blisters.

Using the High-Q-Cast process, a vacuum is established in the die prior to the injection of the molten metal, thereby minimizing porosity and improving mechanical properties. The final parts can be heat-treated and are suitable for use with a variety of joining operations.

Magna is currently building a high-pressure vacuum die casting facility in Telford, UK, to support Jaguar Land Rover (JLR). Production there will begin in 2018. Skszek continues: “Magna has five facilities around the world capable of making these parts. We've just – in the past three years or so – developed the capacity globally to supply these parts. Traditional applications are in the body structure and chassis.”

According to Skszek, the design of the bolt-on beltline is unique. It serves to stiffen the structure, and during assembly the beltline inner is fitted last. This makes it easy for the door module to be installed, with the beltline securing everything in place.

Using the process, a non-graphite-based lubricant is first applied to the aluminium blank and allowed to dry. This blank is then heated between two hot plates to around 250°C before being transferred via robot to a stamping die. The dies are not heated and run at room temperature. In serial production, these dies would need to be cooled so they would remain at this temperature.

Forming occurs in one step in a conventional mechanical toggle press at a speed of 160mm.s–1. Pierce and trim operations take place when the parts have cooled down fully, and the lubricant can be washed off with pressurised water solution.

This focuses heat at the mating surfaces of the pieces and minimizes the bulk heating of the parts, enabling precise joins, the joining of grades with challenging metallurgies and the formation of multiple welds simultaneously. Skszek says: "The benefit of the process is that you reduce the width of the flanges. Normally you need about a half-inch wide or 12mm flange to spot weld the parts together. This process significantly reduces the width of this flange down to say 3 or 4mm and you avoid all that peripheral mass."

Smart tech latches onThe use of Magna's SmartLatch electronic latch system – which debuted on BMW’s i8 hybrid-electric sportscar – eliminates the need for rods and levers in the door and enabled the development of a unique carrier module with integrated glass guides. In total, the latch system and module account for 13% of the total mass reduction.

Grupo Antolin manufactured the interior trim components. Its use of advanced moulding technologies – such as Trexel’s MuCell microcellular injection moulding process – and polymers contribute approximately 7% to the total mass reduction.

The glass assembly is a laminate comprising an outer layer of traditional soda lime glass and an inner layer of Corning's chemically toughened Gorilla Glass, separated by a layer of polyvinyl butyral (PVB). This accounts for 12% of the total weight savings, with the remaining 13% achieved through the speaker (which features neodymium iron magnets rather than those based on ferrite), mirror assembly, exterior trim, hinges, sealing system and wiring harness.

Skszek sums up: “the bottom line is we achieved 42.5% mass reduction relative to a FCA Chrysler 200 vehicle, and our cost per pound saved is estimated at $2.50 – well under the $5 target.

The FCA engineering team has confirmed that the door is compatible with its existing assembly operations and has carried out computer-aided engineering (CAE) durability, fatigue and safety tests. The partners now plan to validate this performance in the real world using standard OEM tests.

Magna hopes that the door will be ready for use in production vehicles by the end of 2020.