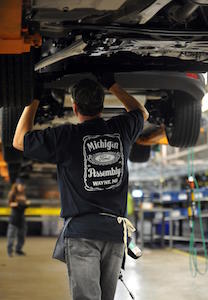 US – The funds will go towards upgrading Michigan Assembly Plant, increasing capacity at Romeo Engine and developing an advanced data centre. Ford says the investments will help it to “strengthen its leadership in trucks and SUVs and support the company’s expansion to an auto and mobility company”.

Ford is spending $850m at Michigan Assembly to retool the plant for the production of the all-new Ford Ranger and Ford Bronco, respectively from the end of 2018 and 2020. The work will begin in May and is scheduled to take only four weeks, having been modelled on the vehicle changeover at Dearborn Truck Plant in 2014.

At Romeo Engine, $150m will be used to add tooling and capacity for engine components for vehicles including the Ranger and Bronco, with 130 jobs created or retained. The plant currently makes engines for the Ford Super Duty, E-Series, Ford Shelby GT 350 Mustang and Shelby GT350R, plus parts for the F-Series, Mustang, Explorer and Edge. The changes will occur in early 2018.

The $200m advanced data centre, at Flat Rock Assembly Plant, is the second such facility being built by Ford in Michigan to support its “auto and mobility company” ambitions. The OEM expects its data usage to increase by 1,000% to 200 petabytes in 2021 owing to manufacturing and business needs, plus new mobility services such as more connected, autonomous and electrified vehicles. The new data centres will form a “world-class” infrastructure for the storage, processing and integration of data, says Ford.

The new investments bring the total invested by the OEM in Michigan to $1.9 billion in the past three months. Ford says it has poured $12 billion into its US plants and created 28,000 jobs in the last five years.