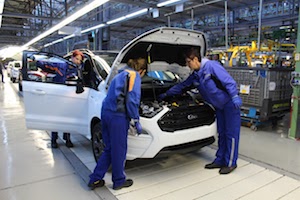 Romania - The OEM has confirmed it is spending €200m (US$236.17m) to ready its Craiova plant for the production of a second vehicle, the name of which will be confirmed closer to launch. It will be built alongside the EcoSport small SUV and the 1.0-litre EcoBoost engine.

"This new investment will add to our evolving line-up of exciting new models manufactured in Europe and continues the transformation of our Craiova facility," remarked Steven Armstrong, president and CEO, Ford of Europe, Middle East & Africa. "The addition of this second vehicle is a testament to the operational flexibility of our Craiova plant and reflects the strong partnerships we have with local suppliers and the community."

Ford expects to create 1,500 jobs in the region, bringing total workforce at the plant to 5,900. The OEM has spent around €1.5bn on the facility since acquiring it in 2008, installing 550 robots and making several upgrades to the paintshop, trim and chassis areas and bodyshop.

Discussions have been on-going between Ford and the Romanian government. Dacian Ciolos, who served as Romania's prime minister between November 2015 and January 2017, encouraged Ford to expand its operations in the country back in May 2016, while Ford has been requesting upgrades to Romania's infrastructure and logistics services. These are "needed to maintain the global competitiveness of the Ford Craiova manufacturing operations," says the OEM.