In an effort to end its boom-bust cycle, Aston Martin aims to double production capacity by 2019 while cutting manufacturing costs 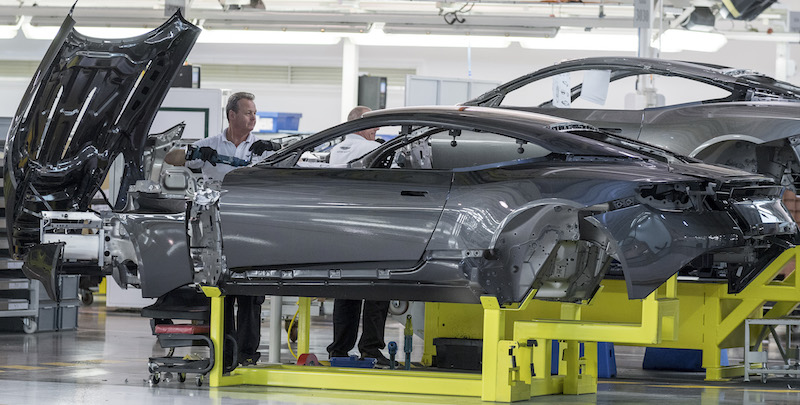 For a luxury maker so used to luring the rich, profits have proven elusive for Aston Martin over the course of its 104-year existence. But the first signs that its CEO, former Nissan executive Andy Palmer, will overturn that pattern came in the first quarter of this year, when the privately owned company posted profits of £5.9m ($7.5m) for those three months, against losses of £29.7m for the same period the previous year.

The catalyst for this turnaround was the launch of the DB11 supercar last year, a key model in what Palmer calls “the second-century plan” and the first on a new aluminium platform to replace the outdated architecture created by Aston’s previous owner, Ford. Later this year, Aston Martin will unveil the entry Vantage model and in 2018 it will lift the covers on the range-topping Vanquish, both of which use the same bonded platform. Then, in 2019, comes the real game-changer, an SUV called DBX that will be built at a new plant in St Athan, south Wales.

Filling capacityThe DB11 came too late to really revive sales last year, which stood at 3,687, down from a high of around 7,000 just before Ford sold the company in 2007. But the Q1 total this year was 1,203, suggesting that Aston could get closer to 5,000 by December, particularly when sales of the newly launched V8-engined model are added to those of the V12 version.

This is still nowhere near to the capacity of Aston’s UK plant in Gaydon, Warwickshire which is almost 10,000 units when working at three shifts, according to production director Keith Stanton. Right now, only the bodyshop operates three shifts, with two in paint and one in trim and final assembly.

However, in 2018 assembly will move up to two shifts to incorporate the next model, the replacement for the Vantage, which will increase production capacity to 9,000, Stanton says.

He expects the Gaydon plant to build 7,900 cars next year, of which around 5,000 will be the big-selling Vantage. The two cars have a production line each and if this number is achieved it would be a record-breaking figure for Aston, and require more staff; Stanton estimates that another 250 will be needed next year to add to the 650 already working in production. “That would be an all-time high,” he says. It’s a change from 2015, when Aston announced that it would cut its workforce by 295 people, although none were from production.

Of the current 650 working in manufacturing, 250 are in trim and final assembly, 260 in the body and paint facilities and 140 in ‘off-track’ areas including special vehicles. 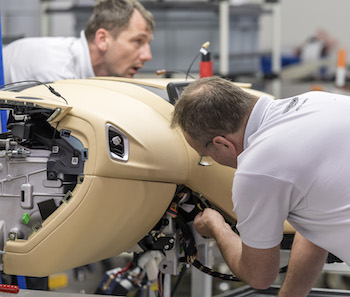 Investing for growthGaydon has received significant investment since Andy Palmer arrived in 2014. A new bodyshop was installed as part of an expansion of the factory space by 10,000 sq.m, and in 2015, a multimillion-pound warehouse and logistics hub of around 23,000 sq.m was built nearby in Wellesbourne. A new pre-production line was also installed.

Stanton says he has been working to increase automation in the factory since arriving in 2006 from Ford. “When I first came to Gaydon, the site was a niche car manufacturing facility, with not much conveyorage, no robots at all, low levels of automation and very labour intensive,” he recalls.

One of his first moves was to install robots into the paintshop, then conveyor systems for the production lines. More recently, the upgraded bodyshop was fitted with automatic changing gates for the framing section, robots to install doors, boots and bonnets, and more automated adhesive systems to apply glue to bond the bodies together. Stanton has also installed more sophisticated camera systems for making sure the bodies have been bonded straight.

He’s open to more robots, if they’re cost-effective. “We’ve got robots in body and paint and final, and if I could find an application in the trim shop, and I can afford it, I’d put it in there as well. I’ve looked at applications in other car plants, and I’m open-minded,” he explains.

Stantan has been under pressure to reduce spending ever since 2015 when Palmer declared that he wanted the company to be “world-class in terms of costs” after finding that Aston Martin never had a dedicated cost-reduction process prior to his arrival. The drive to increase parts sourcing in low-cost countries such as India or China (see box) is part of that and Stanton is looking for ways to make the manufacturing employees more efficient.

However, he is also focused on quality. “What we don’t do is ever drive the cost down at the risk of quality,” he says, adding that the ratio of his workforce employed in quality roles is around 13%. “That was opposed to another car plant I worked in, where it was as low as 2-3%,” he states. 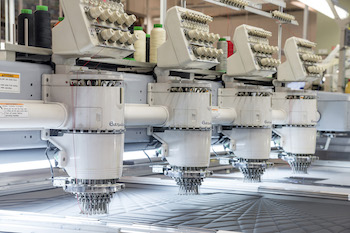 New quilting machines at Gaydon, developed alongside a Japanese supplier, allow for larger hides to be fed through

The factory has also had new rolling roads installed at a cost of £2-3m, allowing the factory to road-test cars off the line without the need to find an actual road. The Gaydon site overlooks JLR’s test track as part of its R&D centre located next door, and it frustrates Palmer that he can’t access it. “I dearly wish we had the Gaydon track next to us. It sits there and it’s a bit frustrating we’re not able to use it,” he commented recently.

Mirroring Gaydon at St AthanThe new SUV facility in St Athan, 15 miles west of the Welsh capital of Cardiff, is currently being constructed within old hangars at a former Ministry of Defence airfield. According to Stanton, this is to be almost a mirror of the Gaydon site, with a similar production capacity that will give Aston the ability to produce almost 20,000 cars per year in total. The first DBXs will start production at the end of 2019, Palmer said recently.

Stanton says the recent improvements at Gaydon will be copied over to the new site. “We’re going to implement the things we’ve learnt in Gaydon straight away in St Athan, as opposed to going on a journey again,” he says. Like Gaydon, the plant will have a bodyshop and paintshop as well as trim and final assembly. Cars will be moved around using a conveyor system, and the plant will use a dry filtration system for the paintshop, as opposed to wet.

The DBX is going to be a big hitter out of St Athan if Aston repeats the success that Bentley has seen with its Bentayga SUV, now the OEM’s top-seller at over 5,000 a year. However, Stanton believes that St Athan could accommodate other models should it need to. Furthermore, Palmer recently said that it would be the base for Aston’s push towards electrification.

Aston Martin also sells niche models in addition to its trio of sports cars, which Stanton has to oversee. For example, the Rapide saloon, which currently goes down the same line as the outgoing Vantage, but will shift to Aston’s pre-production line when manufacture of the new Vantage gets underway, perhaps a measure of how crowded Gaydon is becoming. Also proving popular is the Zagato-designed version of the Vanquish supercar, for which production is now around 30% of the car’s total, or around 20 a month.

"I’m not going to worry about [the UK potentially leaving the EU customs union] until I know what the problem is. You can spend far too much time contemplating what we should be doing, only to find out we’re wasting our time" - Keith Stanton Manns, Aston Martin

The latest niche model is the Valkyrie hypercar developed with Red Bull’s Formula 1 team, which Stanton expects to be building in a new facility close to Aston’s Wellesbourne logistics centre. Aston will build 150 of the car, which will sell for £2.2m when it launches in 2019. Despite the cost and exotic appearance, Stanton does not foresee any difficulties. “It’s no more complicated to build than anything else we’ve built in the past,” he says.

The rise and rise of personalisationEven for low-volume Aston Martins, customers are demanding even more stand-out personalisation, and making that happen in the normal flow of production is a headache for production director Keith Stanton.

“The level of personalisation has increased dramatically in the last two years. For me, it makes it much more complicated,” he says. He gives the example of the paintshop, where instead of using stickers applied afterwards, the different options such as stripes and contrasting roof colours, are painted on. “Virtually everything we do is painted, and that’s a problem because we have robots that paint, then we have to personalise the car by masking it and spraying the graphics by hand.”

That personalisation also applies in the trim area, where bespoke options include leather seats embossed with names or logos. To bring different contrasts to the leather used, Aston has installed new quilting machines developed alongside a Japanese supplier to allow it to feed larger hides through. It also has a brogue-ing machine to punch in perforations. Stanton estimates that the push for personalisation has increased revenue for the firm by around £2-3 m a year. 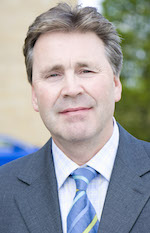 Stanton has worked as Aston Martin’s production director since 2006, when he joined from Ford (Aston Martin’s owner at the time). He started out at Ford in Dagenham and worked for the company for 24 years, in the UK and elsewhere in Europe, including six years in Portugal. He rose to become head of Transit production for Ford of Britain, before leaving for van-maker LDV. “I was poached to turn LDV into the new Transit. I was promised all sorts of investment, but that only lasted eight months,” he said.

Aston Martin and BrexitThe carmaker’s production director, Keith Stanton, talks about the challenges of Brexit and how it will alter the company’s policy on sourcing parts.

Where do you source your parts from, based on value?Currently 64% is purchased in mainland Europe, 29% comes from the UK and 6% from the rest of the world. The UK figure has been stable for some time. There are some components we use, Brembo for brakes and Graziano for gearboxes [both Italian], and certain suppliers we use because they’re the type of supplier we want for the car.

Will that percentage change for the SUV built at St Athan?We’ll use a similar supply base to the sports cars, so I don’t see that changing drastically. I want to try and increase the amount of low-cost sourcing of parts like castings in India and China – particularly India. That’ll have some impact but not drastically.Will Brexit push you to become more localised in the UK?Not particularly. The drive for more low-cost sourcing wasn’t driven by Brexit. We were going to do that anyway.

A BBC news report recently used one of your suppliers, engine block maker Grainger & Worrall, to show how many times parts cross the border into France before they are fitted to cars. Does it worry you that the UK might leave the EU customs union?I’m not going to worry about it until I know what the problem is. You can spend far too much time contemplating what we should be doing, only to find out we’re wasting our time, and we’ve got plenty do already. I’m of the opinion it’s not worth working on until we know we’ve got a problem.

At what point do you need to know?Normally, if we want to start re-sourcing and looking at alternative suppliers it takes six to 12 months, because a certain amount of validation has to go on.

I guess you can’t shift engine supply from Germany, with the V12 coming from the Ford plant in Cologne and the V8 from Mercedes-AMG?We can’t do anything with those two engines, but of course we’re at liberty to design new engines for the future and decide what we do and where we build those engines.