Building for the future

Subaru has spent $1.3bn at its US plant to increase its capacity and is now preparing to produce a new SUV 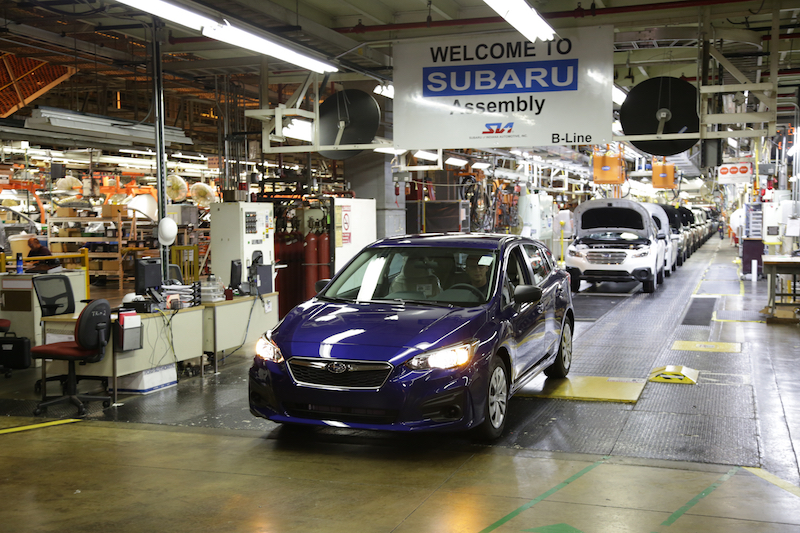 Subaru of Indiana Automotive (SIA) reports that it has invested $1.3 billion at its 832-acre site in Lafayette, Indiana, over the last four years. This has increased both powertrain and vehicle production capacity, boosting output to 380,000 vehicles this year. As well as adding the Impreza to its production line-up of Legacy and Outback models in November 2016, SIA is preparing the factory to produce its new Ascent SUV in 2018. As part of a $400m expansion, a new paintshop was added in March 2016 in preparation for the start of production of the Impreza.

The original paintshop has two lines. The A line is for both the Legacy and Outback models. The B line was originally for Toyota Camrys that were built at the plant between 2007 and 2016 and needed a separate paint booth due to having different paint colours from the Subaru models. Now that the Camry is no longer being built there, the B line is used for extra production of the Outback, which is the plant’s topselling model. The new paintshop is for the Outback and Impreza models.

Orange C-hangers bring the bodies-in-white (BIW) from a storage area to the Transfer 1 point, where they are transferred onto grey hangers to be taken through the pretreatment and the electro-deposition (e-coat) tanks. The bodies are prepared with water rinse, de-greaser and surface conditioner. Next, they are submerged in the e-coat tank; an electrical charge is applied to bond the coating to the metal. The bodies are then rinsed and dried in an oven for 47 minutes.

In the paintshop, personal hygiene and other products are strictly controlled. Workers can only use roll-on deodorant and certain types of shampoo, conditioner and laundry products. They cannot touch tyre cleaner 24 hours before their shift – or eat popcorn

After going through the drying oven, the bodies are taken to Transfer 2, where they are transferred to frame carriers for the rest of the paint processes. Workers then check and sand the body to remove any ‘high spots’. The sealing area is where most of the human operatives are stationed in the paintshop. On one part of the track, robots and people apply the sealant, while further along another group of workers finesse the sealant finish.

In the next coating stage, one of three surface/primer colours is applied; white, light grey or dark grey, depending on the final colour. The body is then baked and sanded again. The body is cleaned using roller dusters as well as female ostrich feathers sourced from South Africa (male feathers are too oily and leave residue). The feathers are replaced every 90 days.

A basecoat is then applied with the final colour. Robots use a two-pass application system to spray a full bodycoat of waterborne paint. Two robots spray on a vertical axis and two on the horizontal. All vehicles are built to order, with production scheduling having a two-day lead-time, so the robots paint according to order rather than in large batches of a single colour. The spray guns are flushed clean at a special docking station after each vehicle is painted. The guns are then charged ready with the correct colour for the next vehicle.

After the basecoat has been applied, the body is dried in an air tunnel as it passes through to the clearcoat area. This solvent-based coating is three times as thick as the basecoat. A final bake at 140°C dries the clearcoat then the painted bodies are transferred to the trim and final assembly lines. The total (old) paintshop process takes eight hours.

As part of the strict quality control at the facility, all the bodies are visually inspected in light tunnels after each coating process. Any defects are marked for rectification and vehicles are redirected to a different line. All the bodies are RFID-tagged with their specifications; scanners are located across the entire 18.5 miles of production lines in the plant.

All personal hygiene products used by workers in the paintshop are strictly controlled. For example, they can only use roll-on deodorant, they cannot eat popcorn prior to coming to work or use tyre cleaner 24 hours before starting work. Furthermore, only certain types of shampoo, conditioner, laundry products and so on are allowed. The issue is that many household products have a silicone base and this can cause defects in the paint finish, ranging from an ‘orange peel’ effect to cratering.

The Ascent SUV will begin production at SIA in 2018

When it comes to technical differences between the old and new paintshops, the latter is more environmentally friendly, but work is ongoing to upgrade the original line to meet similar standards. In terms of energy efficiency, the old paintshop uses a wet-on-dry process, so there are a number of drying stages to be completed between coats. The new paintshop uses a compact, wet-on-wet process that shortens the process time.

In the bodyshop there are in-process control (IPC) areas for each model. A random sample of all models are taken off the line and checked for fit and flush, using micrometres. In addition, an ultrasound system is deployed to check 200 critical weld points in a six-hour process. Running two (A and B) lines, this area uses Nachi robots to complete 3,800 spot welds per vehicle and SIA has developed a process for weld-tip conditioning. This area also stores a two-day inventory (220 vehicles) of BIWs to act as buffer to avoid any downtime further in the process.

Elsewhere in the plant, the press shop is equipped with four transfer presses – 4,500 tons, 3,500 tons (two of these), 2,700 tons – and a 5,000-ton, high-speed tandem press, while the assembly area continues with the A and B line configuration and has also been upgraded in preparation for the start of production of the new SUV next year.