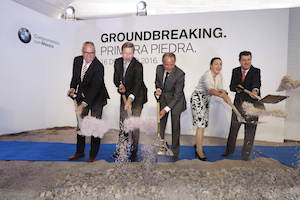 Mexico – Once construction is complete, the plant in the north-central state will make BMW 3 Series sedans, with capacity for 150,000 units per year. Production is expected to begin in 2019.

The new factory will have a bodyshop, paintshop and assembly hall, and represents an investment of $1 billion. Its establishment will create at least 1,500 jobs. Board of management member for Production Oliver Zipse promised that the plant will be “a leader in productivity and sustainability, thanks to the use of innovative technologies”. He said: “All of BMW Group’s knowledge and capabilities will be on show at our new location in Mexico.”

BMW will power the plant fully with green energy, mostly relying on solar arrays onsite. The factory will also conserve water, with a paintshop which produces zero process wastewater – the first such facility in the OEM’s global production network. The water needed for painting will be reconditioned and recycled. BMW claims that, from its first year of operation, the plant will be its most resource-efficient factory worldwide.

The OEM chose San Luis Potosí as a production location because of its broad supplier network, skilled workforce and existing infrastructure. The new plant will also balance out production at BMW Rosslyn in South Africa, which will now make the X3 instead of the 3 Series. For its construction, and the installation of equipment, BMW is using digital 3D plans; during each phase, architects enter information such as dimensions and dates into digital models. Moreover, digital 3D scanning technology is being used for the first time during set-up. According to BMW, the combination of these two methods enables real-time analysis of the construction progress and cost-efficient modifications, enhancing planning reliability.

BMW’s plants in Munich, Germany, and Spartanburg, South Carolina, are assisting the development of the San Luis Potosí factory. Munich is acting as the lead plant for set-up and training, and will educate 500 Mexican employees by 2019. Local programmes are already in place; 25 mechatronics engineers started their training in September 2015, and this year will see the launch of similar programmes for production mechanics and automotive mechatronics specialists, in partnership with technical colleges in the region.

San Luis Potosí will join Spartanburg, which has also received recent investment, as a full production location at key locations in North America, one of the most important growth markets for BMW. In Mexico, the company has had a local sales operation since 1994, which last year sold 17,475 vehicles, a 17% increase on 2015.