BMW's original is still a front-runner

Two things make BMW Munich plant stand out. Firstly it’s the only one of the manufacturer’s plants to produce both vehicles and engines. Secondly, and perhaps more significantly, is its location. The plant, established in 1922 to produce aero engines, is now situated in the middle of a densely populated and built up urban environment; not ideal for a carmaker that needs to develop and expand its production capacity. Obviously this was not the case when the facility was established, but now the city has grown rapidly around the plant. 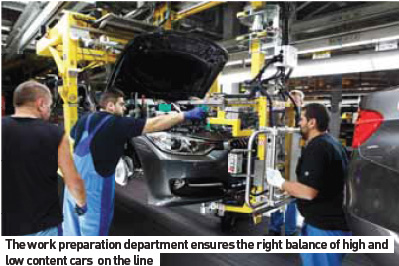 With no room to expand outwards, the plant has built upwards, and now incorporates fives levels of production. Although this may be the company’s oldest plant it utilises the latest production technology to optimise the space available. First stop was the press shop. You might expect to hear or feel the presses in operation before you enter but BMW has gone to great lengths to minimise the impact of production activities on the surrounding area. As such, the presses are housed on the first floor, rather than at ground level. This reduces the transmission of vibrations and noise; and it works, the hall is eerily quiet.

This area has two press lines. One is a newly installed (2011) Schuler servo driven press, delivering 9,000 tonnes of force, to produce whole vehicle outer side-panels. The process is fully automated from handling robots placing blanks on the line, through the several pressing operations to the finished piece. At this point workers manually inspect and remove the panels ready for delivery to the bodyshop. Detailed quality control requires a sample batch of panels to be removed periodically. The second press line is older and produces smaller parts for the body construction. A key factor in the installation of the new servo press line is the speed of tool changing. The dies can be replaced within three minutes through a simple operation – sliding out one die and sliding in the replacement. Previous press equipment would need 15-25 minutes to complete the change over.

Close technical support
Whatever the challenges presented by the plant’s location there are also some advantages. The tooling for the dies is developed and produced at the nearby FIZ research and development centre, allowing for fast delivery of tools and close technical support. The press shop handles up to 20 different types of steel, including UHSS elements. The latter parts are ‘warm’ formed with the hardening process carried out in stages, the final one being in the paintshop ovens. To ensure consistent pressing quality, the dies are regularly inspected and cleaned. As such, BMW says it will deliver a service life of up to 17 years. With the vehicle production lifespan being around seven years the tooling is sold on to other companies to produce spare parts.

Automation and repair
Automation is at a high level at this stage of the production process with the press shop at almost 100% and the bodyshop at over 90%. There are 650 robots in use at the plant, supplied by Kuka and ABB. Operating between 6-7 axes, these perform a mix of handling, welding and painting operations. The robots operate in densely packed cells, with operations closely overlapping. This has enabled BMW to maximise the production space at Munich. The facility houses a robot ‘hospital’ for repair, reprogramming and training. Spare robots are located in a separate cell, performing basic routines in readiness to rapidly replace any units in need of maintenance or repair. 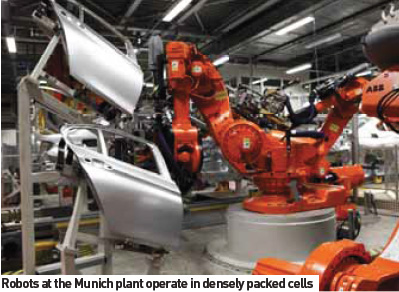 A new addition to the bodyshop was added in 2011 – expanding upwards. Here the robots join the front and rear sections to the to the floor pan. Further along the line a turntable system holds the bodyshell (alternating between sedan and touring models) allowing workers to place smaller structural sections into position. This then rotates to a robot welding station where the parts are fixed in place. This again saves space and improves productivity. Another example of the unique production structure at Munich is the robot cell dedicated to applying and checking the ‘crash glue’ bonding agent and spot welding the inner side-panels to the body. Instead of operating in a traditional line the process is split over two levels. The cell features 12 robots carrying out handling, bonding and welding operations. After the glue has been applied to the panel is it presented to a machine vision system to establish the accuracy of the application. The panel is then positioned on the body and welded into place. This operation sees the robots perform 100 spot welds in 60 seconds. As this is a mixed line (sedan and touring bodies) the framing units swap automatically according the body type coming through.

Green paintshop
Each body shell consists of 600 separate parts and requires 6,000 spot welds to complete. There are two ‘in-between’ levels that provide storage for the bodyshells and transport to the paint areas. Reducing energy consumption and minimising harmful emissions are key priorities for the running of the plant. In the paintshop, great efforts have been made to reduce the amount of VOCs produced per car and this now stands at 1.81kg per vehicle; reduced by 30% over the last six years. Water is used to remove the overspray from the paint booths but again the plant achieves a recycling rate of 99%. Each painted car accounts for 240 litres of waste water, down from 460 litres per car in 2006. The resulting waste to be disposed of is down to just 50 grams per car from over 2kg in 2006. As mentioned earlier, plant Munich also assembles engines. Here the production covers a variety of units, from hand built V12s for Rolls-Royce and 7-Series models, to V8s for the M3 and M5, 6-cylinder diesel and the new 4-cylinder engines. All finished units are subject to cold testing, again as part of the drive to reduce emissions produced by the plant. BMW’s oldest plant uses the latest technology to optimise production space and reduce waste and emissions, but it also leads the way in developing the production processes for new models – quite an achievement in the middle of a major city.

The view from inside, looking out

AMS interviewed Dr Thomas Lehmann, senior vice-president at BMW’s Munich plant, to get an insight into the production operations. AMS: The Munich plant is building the sixth generation 3-Series model. Can you provide us with an overview of how the plant adapts to the production of a new model.

Thomas Lehmann (TL): It’s a big responsibility for us as plant Munich is a ‘front-runner’, this means we have to establish the optimum production process for the new generation 3-Series, that will then be adopted by other BMW production plants [all over the world]. Here we are the technical partner to the product line development section, so plant Munich is involved very early in the production development of a new model.

This means that my colleagues at other plants are watching us and relying on Munich to qualify the most effi cient production process ready for them to use. We started production of the touring model back in July; this will be exclusive to plant Munich. So no other plant is currently producing the new 3-Series Touring.

One of the strengths of plant Munich is its location. We are very close to our engineering development centre, which means that it is much easier and quicker to deal with any technical issues that might arise. The process between development and production is highly integrated. We have the product line development personnel here on site with our production engineers throughout the process, starting with the prerunner production hardware being trialed. This integration of the new model is a huge task; it has taken up a great deal of our time here at Munich for the last three years.

AMS: What is the timescale from vehicle development and prototyping at FIZ to start of production of the new model at Munich?

TL: This takes two years. For production there are a number of steps to follow; we call them pre-series 1 and 2. The fi rst is development of the production hardware and process; the second is production of the vehicle. But we go through a large number of changes during the process to reach the series production model. We work with a lot of external parts suppliers so these have to be integrated into the process. The tooling used here has to be the same as that in other potential production plants to ensure continuity of supply in the event of a break down in the equipment. We can’t have a single point of failure. Ideally we would want to transfer from production of the old model to the new one with no decrease in output, but in reality we have to initiate a rampdown and then ramp-up of production to ensure a smooth change over.

AMS: How much computer simulation goes into the process?

TL: There is a lot of computer simulation used in designing the product, working out what components are needed and where, how best to construct the vehicle, calculating the optimum weight etc. In the production phase we use computer simulation in the bodyshop. This is to calculate the complex operations of the robots, how they interact and the number of units that can be produced in a set time. This is very important. We go through a number of simulations to fi nd the slowest point of production. There is no point having one stage producing at a high rate only for everything to be slowed downed in the next stage. So we use the simulations to ‘balance’ the production lines, especially in those areas using high levels of automation.

This is different for the assembly areas [with less automation], here we aim for a tact time of one minute per station. So we are more focused on the content of the production line in terms of the model (touring or sedan) and variant being assembled. With vehicles that have more content (extras) it won’t be possible to achieve this tact time at certain stations, so the work preparation department goes through the list of cars to be produced that day and establishes the best balance of high and low content vehicles and model types to ensure the workers are able to achieve the target takt rate. We plan the work fl ow fi ve days in advance, this also includes having to correctly sequence the parts supply. We don’t have the space on the line to store large supplies of parts so this needs very careful planning to ensure the worker has exactly the right part for the vehicle coming down the line. This is very much a just-in-time and just-in-sequence approach. We have off-site facilities that build the parts sequence ready for delivery. This whole production process is developed, tested, standardised and rolled out for the new model. This requirement for a standardised production process applies to all models.

AMS: What’s the most recent addition to the production process?

TL: We have recently introduced a new press line. The new press offers the advantage of a very fast tool changeover time; now it takes only three minutes, down from 15 to 25 minutes with the old press. This means we can now produce 12 different orders a day, rather than just two or three. It also makes a big difference in terms of parts storage. We can produce pressed parts on a just-in-time basis, reducing the need to store parts, for which we have limited space, or transport them in from outside. This also benefi ts the production of large external panels, as it reduces the risk of damage during transportation.