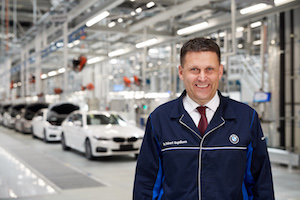 Germany - Robert Engelhorn is set to take over as director of the OEM's plant in Munich. Previously head of the technology and production division at the BMW Brilliance Automotive (BBA) joint venture in China, Engelhorn will succeed Milan Nedeljkovic, who is assuming management responsibility for the corporate quality division.

Daniel Schäfer will fill Engelhorn's role at BBA, while Robert Küssel will become the director of BBA's plant in Tiexi, China. Küssel was previously head of assembly at the Dingolfing plant in Germany.

Johan Mouton is also being appointed head of BMW's plant in Rosslyn, South Africa. His most recent role was head of painted body at the company's Oxford plant in the UK.